(film review) - The Cabin In The Woods 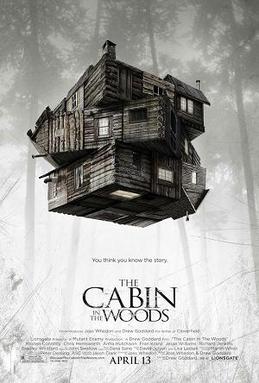 It's Only A Gameshow, Right? Well, we should start looking into "Gameshows" a bit more, judging by this one. We aren't told much about this film other than the fact that these teenagers go to a cabin in the woods for a little break. However, for some reason these kids are dying and it all seems to be a little big brother-ish with them being the "puppets" and these cosy other people who are watching them being the puppeteers.

Chris Helmsworth from Home and Away or who you might remember him, donning a rich red cape (no not superman) as Thor, is one of the lead characters in this film. I'd rather not go into it too much because, although you might think of Jason Voorhees and Camp Crystal Lake, this film is nothing like this at all. Other than the hack and slash elements to it. Oh, and the woods. Oh, and the lake. But I'd strongly recommend to watch the trailer to get an idea as I don't want to give it away, but there are strange things afoot with this film and not everything is what it seems, especially with the little twist at the end. This film is very different and for me, has a sort of Wes Craveny feel to it. Shocking, horrific, terrifying, but also manages to sneak in very humourous and witty parts into it. I might be getting old, but I spent quite a bit of time covering my mouth. Not yawning, but due to shock. Other times, I was laughing. Make sure you go to see this as I left the cinema thinking, "That was a really good film - very different".

Unless you don't like ...Gosh, I almost did a spoiler. Ok, lets just say, this film may scare/scar you. Watch in very safe hands to hold and huge shoulders to cry your eyes out in.