(film review) [STREAMING] - All Day and a Night 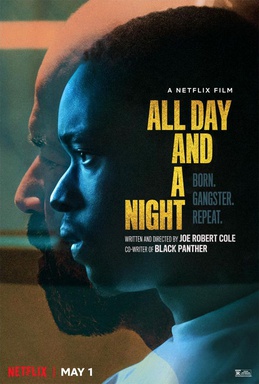 It's nice to get movies like this.  Movies where people can relate to the characters on a more personal level.  Not to say I could, but I can understand why a lot of people like the main character would.  I knew from the direction, the music and style of filming, this movie reminded me of another.  Having looked up who wrote the movie, it then became clear.  If you haven't seen Moonlight you should.  An excellent movie and having now seen these two movies, I see the similarities.  Maybe they were going for a similar thing, but I don't believe this one quite hit the mark like how Moonlight did and for me, that was because of the ending.  I'll explain.

The film is about a young man named Jahkor (Ashton Sanders) who is now expected to serve life in prison for the murder of another man, Malcolm (Stephen Barrington) and his wife.  Once in prison, Jahkor reflects on his circumstances, his upbringing, his life at home, his friends TQ (Isaiah John), Lamark (Christopher Meyer) or the people around him Big Stunna (Yahya Abdul-Mateen II) and JD (Jeffrey Wright).  Through some self discovery told through flashbacks, we find out where Jahkor wanted to go in life, the trauma he has endored and the choices he made which led him to where he is.

This movie is intimate.  It's lovely but heartbreaking.  It's shocking but it is personal.  The story is told by way of narration by Ashton's character, Jahkor.  The film does a series of jumps backwards and forwards through time as flashbacks to help put the story together.  However, although this was great, I felt a situation in the movie flashed by soo quickly, that I didn't understand what was going on and why the next scene was happening.  Upon re-watching, it is marginally made clear, but I felt it could have been handled better because it is a blink and you'll miss it situation, leading to a scene which at first doesn't make any sense.

Other than that, I felt the movie did a great job explaining life's cycle and a corrupted system that doesn't help black men living in specific areas.  The racism, the lack of jobs, the hood life which is constantly thrusted in your face daily in which seems inescapable.  Even when you are doing well for yourself, sometimes you cannot move out of the hood.  I felt this movie, but I also felt that it just wasn't strong enough.  I felt it wasn't as impactful as Moonlight was as that was a powerful film, it even won awards.  And if you are paying attention, Sanders is also in that movie too.  It was the delivery of the last few scenes which led to confusion and could possibly be the reason (for me anyway) why this movie did not stick the landing.  Jeffrey Wright and Ashton Sanders are powerful and excellent.  Ashton with not many words, acts a lot with his face and what he doesn't say.  The actor who plays his mum, Kelly Jenrette, was also good along with Yahya, who seems to be on a roll in every role creating a name for himself as and doing very well, a superb actor.

There are some more things I could say about this movie, but it would give away some of the story beats leading us into spoiler territory, so it is best I be quiet.  Some nice quotes too.  What I will say though, this film can be thought provoking, so if anyone who watches this movie and feel they are in a similar situation as Jahkor, I hope this movie enlightens you and pushes you to also do more or do better.