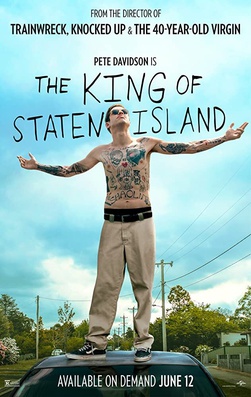 I didn't think we were going to get much trailers for films recently until things started to cool down.  Funnily enough, this movie is being released 'on demand' meaning Rakuten or something like that, which makes me ask, "is this them testing the waters for new films recently for 'on demand'?, do they not have much faith in the movie? or was this always the plan? Regardless I really like the look of this movie.

This movi s comes across to me about a man struggling with his past and accepting his destiny, maybe, in becoming a firefighter like his father.  It seems like there are some unresolved issues with the loss of his father and h find other creative and no creative ways to deal with it, but in the end needs to push forward and love life along with dealing with his loss.  I could be very wrong and maybe he want to be a tattoo artist and actually ultimately ends up doing it, but I don't get that at all from the trailer.  It seems like it would be sad in places, enlightening fun and comedic in places just how life can be some times.  I'd definitely watch this if I can get it some how.  Of we do go back to some sort of normality soon, maybe I can see it in a cinema.