I kept hearing about this show, Gangs of London.  "Have you seen Gangs of London?", "Are you watching Gangs of London?" And my reply was always a no.  I feel I saw a trailer to it, but if I'm really honest, some UK TV shows are simply pants.  And maybe it's because I live in London, I feel anything centred around London would be far-fetched or just silly.  Or, some shows are just not for me!

Having seen Blue Story and how that film made me reflect on my life growing up, gangs and all that, and having watched Luther, a show I've really enjoyed in the past and also Top Boy, I decided to give this one a chance.  The buzz around it was incredible and Gareth Edwards directed one of my favourite films, The Raid, so his directing and action had to come out in some way during this show, right? And it did. And I loved it! 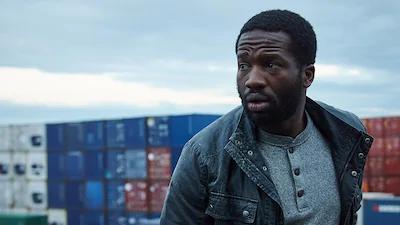 Gangs of London is about a guy named Elliot Finch (Sope Dirisu) who has a past that haunts him.  Undercover police officer, he is assigned to infiltrate the Wallace family and bring them to justice once he has gathered enough evidence of their crimes.  However, when the head of the Wallace family Finn Wallace (Colm Meaney) dies, his family's business within the seedy underworld, their relationships with other business partners are passed down to his unpredictable heir, Sean Wallace (Joe Cole) who becomes an immediate target.  No-one can be trusted and everyone wants a piece of the pie to become the Top Dog in London.  It is up to Elliot to do whatever he can to bring the criminals to justice and not get caught while doing so OR get in too deep and lose himself within this crime family and the world that they live in.

This show grips you.  It starts off a bit crazy with the intro, but as violent the intro is, sets you up for the entire season, because not only is the show violent and gritty, it's not necessarily gory persay, but it is ruthless in respect to how people are offed! People are mercilessly getting mowed down violently and in some cases these may have you squirming in your seat, but they do not shy away from it.  A little graphic but not too much.  If you have seen, The Raid, The Raid 2 and the violence in the action scenes, this IS definitely that but with less martial arts and maybe a bear glass to the face or jaw.


As for the action, I'll go into that a little, because this film tells a story with action peppered in the action does not take away from the story and does not seem forced.  Albeit, there are moments where the violence may seem unnecessary, but the world these characters live in and the seedy underbelly of London, it is nothing to bake a cake just to place a pretty flower on top, because baked into that cake might be half of someone's head or a hand, served to you because you double-crossed them.  The action is fast, very visual and in some cases eratic.  Needless to say, the directing and direction is simply superb.  Gareth Edwards knows how to tell a story through fight scenes and action.  And with this, knows how to tell a story whilst not solely being dependent on the action.


Not to take away from The Raid and The Raid 2, but the raid was a simpler story and if I'm honest, for me at least, the action carried those movies every step of the way.  Not necessarily a bad thing because the story came second place and it didn't affect the movie at all.  Story-wise, Gangs of London comes first and the story is strong.  Think Game of Thrones, different "families" fighting to sit on the Throne, which is London.


Without going into spoilers, the series ends in a way where although narratively, this was possibly the only way to go (up for debate) BUT, I NEED a sequel just like I need another one to The Raid 2.  Maybe two, a prequel and sequel, I need something.  I want to know what happens next, maybe 20 years before or 20 years later.  I believe there are stories here to be told.  Keep them to 10 episodes and maybe we could have an "anthology" sequel or generational sequel, something, as I do not believe the story is over.
It goes without saying though, if this is not your type of show, London Gangsters, gritty and hardcore action, this crime drama is not for you.  Not quite Peaky Blinders as it is more hardcore and modern, but a definite must see.