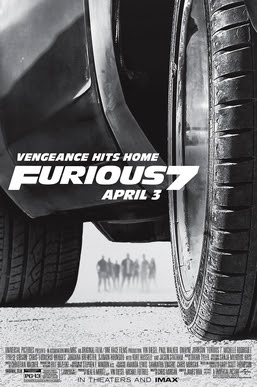 Fast and Furious 7. Yes, 7! There has been 7 films in vein of speedy cars, daring heists and street fights under the banner, 'Fast', 'Furious' or an amalgam of them both. And to think, who would have even thought this franchise would amount to 7 movies. I'm pretty sure Vincent didn't see this one coming. And having done all these films over a number of years, the stars who brought this together have grown a bond with one another, so with the passing of Paul Walker, mid - shoot, you can only imagine how special this film is to them and the many many fans who adore the franchise.
Where the director and studio were in two minds about cancelling the film altogether, they decided to go ahead and complete the movie after their short break and what we got, was a very entertaining and decent film.

Dominic Toretto (Vin Diesel) and his family are attacked very close to home forcing him to retaliate against the previous movies antagonist's older brother Deckard Shaw (Jason Statham) after their last family outing. He is a Ghost. You don't find him, he finds you. As the attack leaves a family member dead, Dom and the gang rally up to pull off a daring heist to capture the ghost and eliminate him with the help of Frank Petty (Kurt Russell) and Luke Hobbs (Dwayne Johnson). Pretty straight forward, right? Yup, nothing more to it.

You couldn't have expected anything more or anything too intricate about FF7 as these films have never been story driven (No pun intended), as such. But, with that said, over the years, it hasn't always been about cars and car racing like how it was back in the day. With the seemingly seem less call back and inclusion of Tokyo Drift (a film everyone tries to forget) James Wan effortlessly makes the insertion of this bad egg film, seem somewhat noteworthy and gives it (partially - I might add) new life and credibility.

You get the same gimmicks from the previous two films (and why not, they have been killing it in the box office, right?), humour, insane and practically impossible feats and stunts, eye candy for men (if cars weren't enough, right?) and brawls like none other. Yes, there will be bits where you think, "Come off it", "Yep, that is some bullsh*t" and "No f*cking way is that possible", but it is all aprt of the F&F fun. Nothing too over the top (haha), as far as F&F goes and nothing too underwhelming. Fast Cars, Explosions, Comedy & Family.
However to some this film up. You get ultimately what you got in the previous outings but with the death of Paul Walker, they amicably weave his departure from the series nicely which doesn't capitalise or force the issue. A tribute, if you will, to a great character in a great series. Time for Fast And Furious...In space!