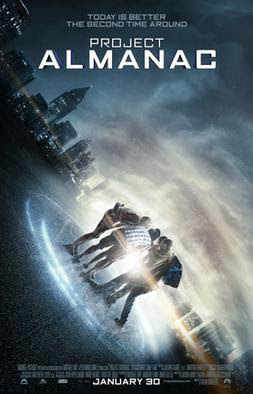 A film about time travel and the repercussions when you alter the timeline. Something which has been trial and tested over the many years from the day it was first conceived. Many successful films involve time travel. Some are poor in execution and some are just poor. But the ones which are successful, stand the test of time (No pun intended) and are obviously classics in their own right. Back to the Future, The Terminator, 12 Monkeys (Now a TV show in which I am finding hard to follow), Timecop & Looper, just to name a few. But we all know the consequences, right?

Aspiring inventor, 17 year old David Raskin (Jonny Weston) is admitted into MIT and upon searching through his attic, he stumbles across an old video camcorder which belonged to his father who hasn't been around for 10 years with a recoding of his 7th Birthday on it. When viewing the recording, he notices both his 7 year old self with his 17 year old self spotted in a reflection. When David and his sister Christina (Virginia Gardner) as well as his friends Adam Le (Allen Evangelista) and Quinn Goldberg (Sam Lerner) do some more searching, they stumble across a device called Project Almanac, a Temporal Displacement device on which his father Ben Raskin (Gary Weeks) was developing for the United States Military. With the blueprints they find, they continue work on the device and create a time machine to travel back in time.

There is only one rule. If they are to use the time machine, they must all use it together so everyone knows what is happening at any one time. This is also to help the structure of the timeline so that no one amends/changes the timeline without any one else knowing, leaving the "current" timeline in disarray. However, David fails to declare his feelings to his crush Jesse Pierce (Sofia Black D'Elia) and uses the time machine to amend this, but this leaves ramifications when David arrives back to present day and things start to fall apart.

Project Almanac is a found footage teenage science fiction thriller which involved a bunch of students who come across a video camcorder with a recording on it. They Travel back in time and things start going crazy. This is exactly what you would expect in a movie like this, so I wouldn't expect anything majorly spectacular. A good little popcorn movie in which you may not even need to see in the cinema, but if you want to see something to pass the time, this film will keep you somewhat entertained. I wouldn't say the film is rubbish or badly written, but it is a time travelling movie which is Sci-Fi but fairly grounded. So with that said, it does exactly what it says on the tin. What I would say is, if Sci-Fi Time Travel grips you, as time-travel can be very confusing if not followed correctly, you will definitely enjoy this film as you will be itching to find out what these ripple affects are and how can they amend them. But like I said before, nothing too note-worthy and not as much of a classic like some of the films I mentioned earlier, but a decent watch nonetheless. Maybe this will change in time. Haha...get it?

The special effects were great. Along with the acting, the storyline was decent (not much to it really) and the pacing of the film was good. Not once did i feel bored or think there might have been a hole in the plot. This sometimes happens when you come across time travelling stories as there are soo many moving parts when you start to mess with the timeline.

Like Time Travel, go watch it. Not superbly great. Teenagers and a Time machine. What more would you want?