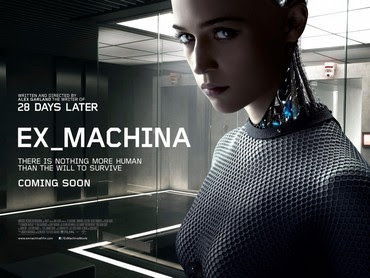 The film stars Caleb (Domhnall Gleeson) who is a computer programmer who wins a company lottery syndicate which allows him to meet the CEO of his company, Nathan. Nathan is an eccentric genius who lives in the mountains in his plush home with his only assistant, Kyoko and wants Caleb to spend a week there to perform a series of tests on a humanoid robot named 'Ava'. The tests are to establish if the android's artificial intelligence can be distinguished from human ones. However, Caleb runs the risk of becoming too involved with the experiment and trying to figure out, what is real and what isn't.

I hadn't seen the trailer to this movie, but the movie poster intrigued me. Knowing nothing whatsoever and entering the cinema with a blank slate was refreshing. Sometimes it is great to know absolutely nothing about the film you are about to see. With that said, damn, what an eff'ed up movie. At least had I known what I was getting into, I would have realised this film was a Thriller, a good one, but sometimes knowing just that much helps a great deal. Also with that said, also allows you to pick out the plot. With a small twist at the end which left me dumbfounded, I can honestly say that, visually, this film was great. The storyline and the acting was decent and intriguing. Not once did it get boring or feel strained and Nathan is such an odd character, you want to know more about him along with Ava and everything what is going on in this house. With the tension and suspense building, the final few scenes are dark and twisted, yet gratifying to an extent, but along with being anti-climatic, leaves you wanting more. Maybe they will do a sequel. SkyNet, anyone?