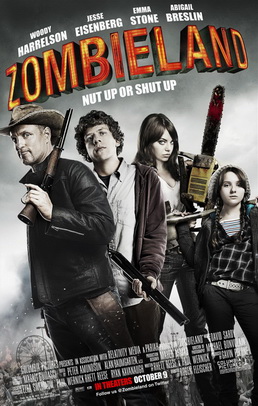 Before this review, I was trying to figure out where I was going to go with it. Yes, the review would be about the film, Zombieland, but as different as the name is, the film fits right in.

Zombieland has no real direction, no real storyline and no real plot. As I think about it, the film has no beginning, nor end. So one would think to himself, 'So, what was the film about?' and the answer to that question is, Zombies.
With all that been said, you'd think this was a waste of time film. Something that didn't quite set out to fulfil it's objective and you wouldn't want to waste your money on the film. But your wrong. Although I have seen computer games such as 'Left 4 Dead' and 'Left 4 Dead 2' with also, not much of a storyline (or detailed one for that matter), the game appears to have more of a storyline than this film, but the film still triumphs as being a really good watch.
I'll explain.
There is a pandemic. We see a post-apocalyptic America, where a zombie apocalypse has been triggered by a virulent form of human adapted mad cow disease. It appears there are only a few survivors. Columbus is a college student on his way to Columbus, Ohio to see if his parents are still alive. Along the way, he bumps into Tallahasse who hails from Tallahasse, Florida (or is going there, I kinda missed that part), who is on a mission to find a Twinkie. They team-up and travel together to only bump into two sisters, Little Rock & Wichita. As you must can tell, these are not real names. There isn't any real names in this film, only places that relates to the characters. The idea is, if someone dies, not knowing their real names means that you are not attached to that person. So in essence, if someone dies, it's an 'Ah well, that sucks. Lets keep it moving' type of attitude. (Liberties - You know, right?)
These two sisters con their way into stealing Tallahasse's vehicle and leave the two guys stranded only to be found later on, on their travels attempting to con another passer-by of their vehicle as the girl's vehicle has broken down. As Columbus calls a truce, they all travel together, go to a mansion to crash and hangout only to then have their vehicle stolen by the girls again in the morning who are on their way to Pacific Playland (a theme park). I guess they were considering they will have it all to themselves, no queues and no people.
But it would turn out that they did have Pacific Playland to themselves and there were no queues and no people who were alive, that is.
As they turn on the lights to the theme park, it attracts all the zombies near by who then start chasing them. Columbus, now having feelings for Wichita (obviously, the place names didn't work), goes after her to express his feelings for her only to be confronted with a theme park full of zombies. I guess, everyone is a hero, right?

As I've said quite a bit about the film but left a lot of it out, you must can tell that the film is a bit 'crazy' in places. For example, Columbus has a set of rules that are comprised of ways to stay alive in-case of a Zombie Apocalypse is to ever occur. This is the central plot theme and are seen as on going gags throughout the entire film.
The list starts at number 1 but doesn't actually have an ending number, but goes up to and possibly past 33. however, not all the numbers from the list are mentioned in the film.

This film is witty and very funny. You may need to see it twice because of Columbus' rules and because of the craziness and hidden jokes that lie within it, but all in all, it is a fun and enjoyable watch. As there could be plans to do a sequel, they may expand on Columbus' list, but keeping the formula of, comedy, blood and guts, it is sure to be a winner.
If you liked Shaun Of The Dead, then you will love this. As they are similar, I can't see why you wouldn't still have a good laugh. Go Watch it!