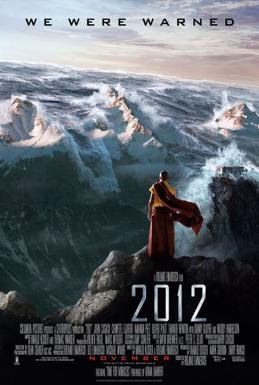 Unlike 'The Day After Tomorrow' in which was a very watchable movie, but didn't help shift the fact that it came across as a very expensive global warming advert, 2012 is nothing of the sort.
Special effect galore, but then how do you show a world literally falling apart without it? So be aware of this.

This film is basically about the end of the world. It's an event that scientists found out many years ago that would happen, the government try to hide it and when calculations get miscalculated, it's like..."Ermm, Mr. President, we have like two weeks to evacuate and declare a state of emergency opposed to what we thought it was being, 2 years". Well, it's not THAT drastic, but it might as well have been.

However, since the government thought ahead, they asked the Chinese (since they are excellent workers and so good with their imagination and electronics) to make something to preserve life for when the events unfold and if people were to survive, they could rebuild life and start again.

Jackson Curtis (John Cusack) is a writer in Los Angeles who works part-time as a limousine driver for wealthy Russian businessman Yuri Karpov. He is separated from his wife and children and due to spend some quality time with his kids. He takes them camping in Yellowstone National Park only stumble across, The Military, a smouldering lake and a seemly deranged conspiracy theorist (Hippy) Charlie Frost (Woody Harrelson), living as a hermit and hosting a radio show who keeps going on about the end of the world and having a Map in his possession that details the whereabouts of a "Spaceship" that will save mankind.
From this moment, Jackson Curtis is on a crazy near death "adventure" where he is battling for survival to save himself, his kids, wife and her lover to find this "Spaceship" and survive the catastrophe.

I can't say this was a dull film and I can't say it was spectacular due to the events. If these events are to actually unfold in real life and in 2012, we haven't got much time people...lol. But jokes aside, the film is very entertaining visually and comically. Woody Harrelson's role was too funny as well as the Russian Businessman. There will be parts where you will laugh and parts where you will think "WOW!" and although, there are some corny bits to save face for the special effects, I guess some bits can be touching so you may be a bit sad or even teary, but on average, the film is a very good watch. And not only does it question life and what would happen in such events, but how the rich are as well as the poor and how people can be barbaric and selfish.
The main stars of the film are Woody Harrelson, Chiwetel Ejiofor, Zlatko Burić & John Cusack. Also stars, Danny Glover & Thandie Newton.

Go and watch it!
Trailer: