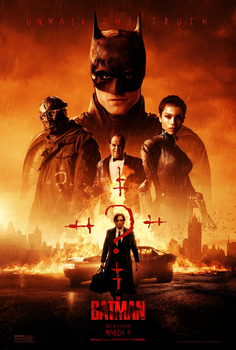 From the get go, I'm going to say just a few things to clear the air first. As fans of specific characters from comic books, we need to understand several things first before going into watching adaptations from comic books. First of all, directors and film studios aim to provide a great movie to make tons of money, so there might be some liberties taken with the source material to appeal to every type of audience member. Secondly, it really does not matter who the actor is playing a role, whether you agree or visualise that person as that specific character or not, the director's job is to get the best out of the actor to fulfil their interpretation of the reference material for the movie they are making. So, I would like to say to the naysayers...remember Heath Ledger, remember Ben Affleck, these actors were not a preference for MANY fans, yet we cannot really see other actors in these roles going forward. This also applies to Hugh Jackman as Wolverine, might I also add. So, put aside your Twilight hate because Pattinson is a great actor. So, I guess the burning question more than anything is, was Pattinson a good Batman, well...yes...yes he was, believe it or not!

Without going into too much details, this is year two of Bruce Wayne becoming the Batman. He is new to this. He isn't as refined or as skilled as The Dark Knight yet, but finds himself working on a case with the uneasy Gotham City Police Department (GCPD) trying to solve crimes carried out by someone who leaves riddles. These crimes seem to target high profile individuals and it is down to Batman to solve the crimes before many more people die and the truth behind the corruption in Gotham.

This film is different to ANY other Batman we have seen before on our screens, why? because this IS The Batman. For those who do not know who Batman is, Batman IS the person and Bruce Wayne IS the mask Batman puts on. To explain that further, the moment Bruce Wayne's parents died, it is said that Bruce Wayne also died in that alley and took on the persona of The Batman (at some point), so the mask he wears IS Bruce Wayne, when he is out socialising etc.  This film hammers that home. Because Bruce's parents died, Batman is the person who wants to try and make Gotham a better place so that no other child has to go through what he goes through. This is why Batman does what he does and this film hammers that home. He is a detective and he IS the shadows. This film hammers that home.  When I say to you, this film isn't like the Christopher Nolan and Christian Bale version, that it is not like the Zack Snyder and Ben Affleck version, that it is not like the Tim Burton and Michael Keaton or Joel Schumacher and George Clooney version, I mean that and you will be very surprised on how different not only this is, but how GREAT Pattison is in the role if you understand who The Batman really is.

This is a long movie and the way it is directed, as a detective noir movie, at times, it does feel like the movie is taking it's time. For 2 hours and 50 minutes or so, the movie does at times feel like it is dragging a little, but if I'm completely honest, I was starving before I went in and was more thinking of my stomach and eating than anything else. So for true transparency, I feel that did hinder my experience of watching the movie, but the movie didn't hinder the enjoyment I got from the movie. The story was great. The acting was top notch. Pattinson doesn't say a lot and does come across a little moody. What do they call it? Teenage angst? Very much that, but he delivers a young man dealing with pain, without even saying much at all very well. From subtle eye movements, body language. I mean, yes he isn't the Dark Knight yet but this film shows us where Gotham City is at present and what the city thinks of Batman, from the Police Department to the average person on the street, to the criminals.

Batman is one of my all time favourite characters because he is smart, knows every fighting style known to man, has lots of money and beats people up with an attitude like no other. He thinks several steps ahead and always has back up plans or a contingency plan for everything and everyone. When we are first introduced to Batman in this movie, the director Matt Reeves paints a very clear picture of who the Batman is in the first 10 minutes of the movie and I couldn't stop smiling. Towards the end, an interaction with a police officer, I couldn't stop smiling. In places, I was laughing because Batman literally is a man of few words and the detective aspect of this movie has never been as realised like this in film. His interaction with people as Batman and his interaction with people as Bruce Wayne are very different and while that is obvious, it's the demeanor change, everything. Which leads me onto the acting. Every actor was great and from what I hear, the director and WB are interested in producing a GCPD show as well as a Penguin show AND a Catwoman show. Some might think that this is milking the franchise dry, but if I'm going to be honest with you, I couldn't be more up for this, because Zoe Kravitz was brilliant and her character seems like it was ripped straight from the comics. Colin Farrell was brilliant and unrecognisable. He was soo good. Gotham City feels soo much like a character in itself, so it is only right to have a show based on the GCPD giving us more of Geoffrey Wright and this world Matt Reeves has created. As for the villain, masterful. Paul Dano was excellent and could likely be discussed with other great villains in the DC universe such as Nolan's Joker. Twisted and deluded, a very fast cry from Jim Carrey's version.

Although the soundtrack is great, the cinematography and camera work was also excellent.  Gotham felt lived in and dirty. Some of the shots were obscured artistically shot in a way that made you feel uneasy. Dark, dingy and out of focus at times. Matt did a great job with this movie and I'm assuming it will do well, we can have sequels where we can go into another few years as Batman learning more and slowly becoming the Dark Knight we all know and love. I just don't care for a Joker right now. Give me a Mr. Freeze or a Calendar Man or maybe someone a bit more fantastical like Clayface or something. Also, throw in a Robin or something, we need to expand this world because what has been done here is great!