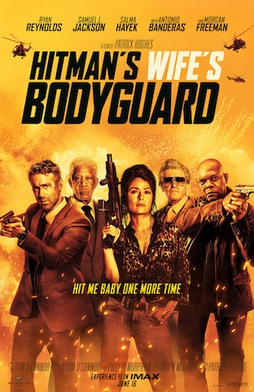 I'm going to start off with...maybe I should have re-watched the first one before watching this.  Although I remember the first one, very vaguely, I remembered it was funny in places and it was simply Ryan Reynolds doing Ryan Reynolds and Samuel L. Jackson doing Samuel L. Jackson with a lot of craziness involved and guns.
In this case, the sequel, this is more of the same but, I'm not sure if it was the drink, tiredness or straight delirium, but this movie had me laughing sooo hard, I was streaming tears and struggling to breathe.  It actually took me out of the film for possibly 5 minutes because I was trying to catch my breath back and stop crying! #Sigh #Goodtimes

Michael Bryce is a Bodyguard, or in this case, a former bodyguard.  Traumatised and suffering from PTSD, he wants out of the life and wants to make peace with it.  However, whilst trying to get away from it all and trying to get some peace and relaxation, Sonia Kincaid finds him and drags him back into the fold of being a Bodyguard for her whilst she has her own mission.  The problem is, Michael is on a sabbatical from guns and firearms and wants nothing to do with it all, but when Interpol show up demanding help to thwart a terrorist mastermind named Aristotle Papadopoulos, Bryce must find a way to carry out the mission and get back into bodyguarding, the very thing he has been trying to get away from.

This film is funny! Whilst there might be some over the top moments, some dark humour, the action comedy doesn't get any more action comedy than this.  There was a scene where a car blows up (it's an action film, this can't be a spoiler), and the first thing I thought was, "Ok, that was excessive...Michael Bay would have loved that" But that's just it, the film has excessive moments a plenty, but teeters on the end of anything in the recent Fast and Furious movies.  This movie does everything to push Michael Bryce, especially as he doesn't want to be a bodyguard, so essentially what the life of bodyguarding is like and pairs him up with two impossible people he shouldn't be around.

There is a scene later in the movie that straight killed me in the cinema and I can't say too much as I could give away the scene but it was comedic genius. Samuel L. Jackson and Ryan Reynolds destroyed the scene as the acting was perfect especially coming from their characters.  Selma was also masterful as she was straight fowl-mouthed and everything you may vaguely remember from the first movie, but more.  Antonio was great as essentially a Bond villain and he also played his part well, but a special shout out goes to, Frank Grillo, Richard E. Grant and Tom Hooper, as Frank was good, Richard was great and Tom was just excellent.  I'm enjoying seeing more of Tom in films as I remember him from Game of Thrones as Dickkon, but more recently as Luther in Umbrella Academy.  Put him in the MCU so we have more 'T' 'H' 's to rival the many Chris'.

You do not necessarily need to see the first  movie to watch this one as it pretty much stands by itself and the movie has some soft character building moments too, but all in all, this was definitely worth the watch as I had soo much fun with this!  I hope they do another.