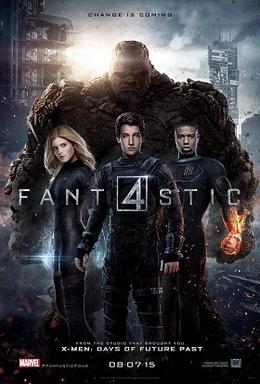 I've been watching this develop from when they first announced it. I knew they were going to reboot it at some stage because the previous 2 didn't do that well and had they not rebooted the franchise, the rights would have went back to Marvel. With that said, Fox are having a decent time with X-Men due to First Class and Days of Future Past, but for Fox to keep a hold of their franchises, they will need to make a film every so often or reboot the franchise and do them well. This means, anything Mutant related belongs to Fox and Fox needs to come up with scorchers to keep them or break them up as much as they sensibly can and make great films which brings in money (spin-offs). Deadpool, Gambit and even X-Factor. A New Wolverine is coming but this is meant to be Hugh Jackman's last time. So unless they recast the role, Fox needs to pull more rabbits out of the hat. In Fantastic Four's case, Fox pulled out a Skunk.

Fantastic Four is about a man named Franklin Storm (Reg E. Cathey) who is looking into inter-dimentional travel with his student Viktor Von Doom (Toby Kebbell). He goes to a science fair with his daughter Sue Storm (Kate Mara) and finds a teenage Reed Richards (Miles Teller) along with his buddy Ben Grimm (Jamie Bell) who has somewhat cracked inter-dimentional travel when he was young but has found a way to complete the entire transition. Pleased with what he has seen, Franklin asks Reed to join him in completing a grander design in order to be the first to achieve such a feat. Reed accepted and once he enters the Baxter building and joins Viktor and Sue in the project, they decide to travel through the device only to re-enter earth horribly disfigured. However, once they hone their powers, Doom has his own plans and the team are required to band together to defeat him.

First of all, I'd like to say that this film is better than the first 2 put together, but it isn't a good film at all. The film tone-wise is great. Dark and horror-like for the first half of the film, but after that, the film seems choppy, rushed and just full of nonsense. The dialogue was boring and not very clever. The character's aren't very well developed or their back-stories at all. They had plenty of time to flesh them out. When Dr. Doom arrives, everything goes to sh*t. The special affects are standard, there are some inconsistencies and there is "logic" which makes no sense. There was barely any action and the "Boss Fight" is barely watchable. Again, I say, they had plenty of time to flesh things and plot points out.

Don't get me wrong, the film wasn't absolutely garbage as I have seen some terrible films in my time, and some terrible superhero films, but this film just isn't good. The acting was perfectly fine, even the plot wasn't that terrible, but the cinematography and direction was appalling. For myself, the best bit in this film was when they came back and were all disfigured. That felt like a horror. It was dark, frightening and twisted, but that is the only redeeming thing about the film. Oh, and the throw away remark regarding Dr. Doom's name was excellent and the part in the woods was OK but just wasn't long enough.

This film lost its beat and travels at a ridiculous pace and kinda reminded me of The Amazing Spider-Man 2 at the end but as badly as that was done, this one is worse.
Watch with caution if you really like this from the trailers but to be honest, you are probably best to wait until it arrives on Netflix.

P.s...half of the things in the trailer aren't even in the film and the other half is is the film.