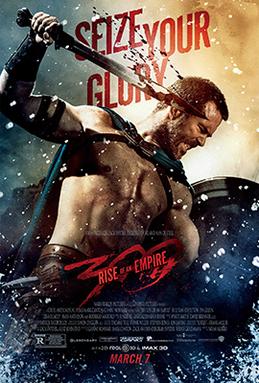 Hindsight is a b*tch and sometimes it is really difficult to have a great idea, work off of it and try and construct a story which will gain praise through all different views or incarnations of said story.

So you understand what I mean, I will just dive straight into this.

300: Rise of an Empire is a standalone film which does not need to be seen with the previous 300 movie. It revolves around the story of the Rise of Greece and the parts these characters play which lead into a story interwoven around this film and the previous film.

The story is being told from Queen Gorgo of Sparta who tells her Spartan Troops before they join the battle of Salamis, the story thus far of General Themistocles of Athens (Sullivan Stapleton), who in the middle of the Battle of Marathon, kills King Darius in front of his son Xerxes. Darius’ Naval commander, Artemisia tells Xerxes of his dying words who then goes off to walk Barron lands and returns as Xerxes the God-King. As Themistocles meets with the council and convinces them to provide a bigger fleet to engage the Persians at see, Themistocles also tries to rally troops from Sparta to no avail. Engaging in many fights, this captures the attention of Artemisia who invites Themistocles to join her and her Persian army to be her second in command.

After watching this film, having watched the original 300 movie, you will generally feel that this film isn’t as great as the first one. This is because we as people like to compare. However, there is a lot of truth into your thoughts on this film because there are a lot of things that do not marry up with your expectations. So where you would think that this film is bound to be bigger and better than the last film, in fact, this film is the prequel and entwining film that weaves in between the sequel and in retrospect should have actually come out first for you to appreciate it more. Had this film come out in 2007, we would have loved this film for it’s story, pacing, special effects, cinematography and sound. If not, then they should have recorded all 3 movies at the same time and release one a year after each other like what they have done with the Lord of the Rings and Hobbit Trilogy. However this film comes across as a money grab with a weak or borrowed storyline which uses “borrowed” plots and special effects whilst they try to milk a 7 year old film for all it’s worth by adding a few sparkles.

Don’t get me wrong, this is a really good film to watch, but seems like a Rehash and I really do feel that if you had watched this 7 years ago and then 300 after, then you would appreciate this film more and the storyline. If they do a 3rd film and I hope they do, they should re-release these films and promote it more as a Trilogy or a film consisting of 3 movies as one total movie spanning over 3 stories from different perspectives.