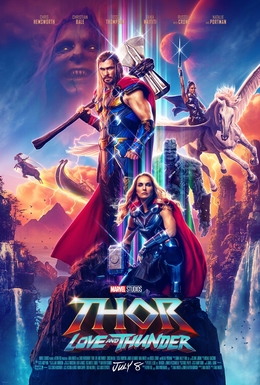 From the 3 O.G Marvel Cinematic Universe heroes we know and love, Thor is the only one to receive a 4th movie, starring Chris Hemsworth and continuing from all the story-arcs that came before. With that said, Thor is the only person, currently, who may have another two movies to come and prove to be one of the only people from the Avengers team that may go on for a few more years until he is old and grey seeing in and out various new members of the Avengers team, whilst he continues doing his thing like the Asgardian warrior he is. But at the end of the day, does Thor and his adventures do anything for you after Endgame? Do you even like this movie? Should you like this movie? What does this movie do for the MCU? And was this movie necessary for the advancement of the franchise? The last two are somewhat the same question, but let me answer this for you.

After the events of Endgame, Thor went off with the Guardians of the Galaxy on a reflection and self discovery mission. After many battles and a different outlook on life, Thor decides to leave the Guardians when he discovers gods are being killed by a being named ‘The God Butcher’ (Christian Bale). Thor must put a stop to Gorr’s tyranny and save the gods with the help of The Mighty Thor, Dr. Jane Foster, who also has the powers of Thor.

To answer the questions above in reverse, this movie opens up the MCU in ways only Thor movies have done before. More characters, more worlds, more lore, cosmic. It expands on creatures and the storyline of Thor. In turn, this is a necessary advancement to the franchise because not only does Thor continue to grow despite the misery that surrounds him, Thor still has a lot to learn and a destination to get to. Rune King Thor maybe? However, Kevin Feige said a while back that Phase 4 will be more Cosmic and Thor has definitely done that.

There are many reasons as to why you should like this movie, but in my own opinion, there are also many reasons as to why you are likely to dislike this movie and one of those reasons is the humour. If you enjoyed Ragnarok, there is a possibility you will like this movie due to the tone, however, Ragnarok, this is not. This movie is funnier and sillier in moments. It reminds me of Guardians two, great film but everyone had a joke. This one, similar but just more goofy in places.

So, if you like Thor, like seeing him fight and like Taika as a director, there is a strong possibility you will enjoy this movie as it is very entertaining minus it's shortcomings. For me, I felt the film was cut drastically to speed the story along. I felt some of the dialog was not necessary at all and felt forced. Some of the actions and gags were over the top and unnecessary, just for the bit. Whilst I did laugh in this movie at some of the most crazy jokes and gags, I will say that, when this film gets serious, this film gets dark and chilling.

Gorr the God Butcher is a great villain, but is not in the movie as much as I would like him to have been and with that said, I would like to have seen much more from him and I believe there was time to showcase this. Which leads me onto nitpicky things I could have done with and without. Without going into spoilers, I will leave it at that but, this movie feels like it was chopped up whilst a lot of the movie is on the cutting room floor. With stories of Lena Headey's role being axed from the final cut, there is definitely a Taika cut!

The music is great. The fight scenes are great. The acting is great (“Look it’s Russell Crowe” - he was good, although his character was a little “off” for me to grasp and get with), but the film requires some more fleshing out of characters and moments. I felt like some story beats were not explained at all, although some things may have seemed self explanatory, an explanation would have gone a long way. How did this happen? Why did that happen? How is this possible? How does this work? Thinking about it now, the saying “phoned it in'' seems to apply for Taika here, in my opinion. Taika is a great director in the few things I have seen him direct, but I feel what he did here, was serviceable and could have been done with a bit more meat on the bone. Other than that, enjoy it for what it is, Thor with a film being more Cosmic and helping to open up the Marvel Cinematic Universe to...well, be an actual universe...what we have seen so far has been mere galaxies...