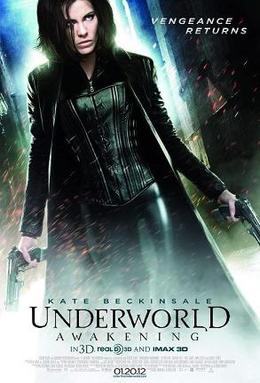 First and foremost. Kate Beckingsale in a Catsuit. MEOW MEOW!!! I'm not sure who I'd like more out of Zoe Saldana in a Catsuit (Colombiana) and Kate, as I've seen Kate in 3 films now donning her Catsuit, but I think they should have a competition. #The End

Anyway, back to the subject at hand. I spent a few evenings watching Underworld, Underworld: Evolution & Underworld: Rise of the Lycans. I should have really thought about it and watched it chronologically, but I just didn't. Nothing lost. But to summarise the story so far.

A Immortal named Alexander Corvinus had three sons. One bitten by bat (Markus) making him the first Vampire, one bitten by wolf (William) making him the first Werewolf and another who lives a normal life bite-free and gave rise to a line of descendants including Michael Corvin who is later to become a Lycan-Vampire Hybrid.
Before that of course, William was captured by Viktor and kept away from his brother, Markus as Viktor believes William to be too dangerous to roam free. With werewolves as slaves to watch over the vampires as they sleep and to work as slaves when they are awake, a werewolf gave birth to a human looking werewolf named Lucian. Lucian was the first of the Werewolves (Lycans) who could change into wolf form and revert back to human form at will.
Viktor raised Lucian, breeding a new species of Lycans. Lucian eventually fell in love with Viktor's daughter and got her pregnant. In fear of the mixing of species, Viktor had his daughter killed in which Lucian got the other Lycans together to overthrow the Vampires and escape captivity. Years, later, Lucian is known as being killed in battle with a Vampire called Kraven who made a deal with Lucian to go into hidding so that the Vampire elders would die and end the war between the species. However, Selene (Kate Beckingsale) discovers that the Lycan's are following Michael Corvin for some reason, to find out later that he is a direct descendant of Alexander Corvinus in which they need his blood to combine the bloodlines to create a powerful hybrid. After Michael gets bitten by Lucian (to get his blood) then by Selene (to save his life), Michael becomes the first Lycan-Vampire in which they overthrow Vicktor, accidentally wake up Markus the first Vampire who is also, a Vampire-Dominant Hybrid now, search for answers as to what Markus is looking for now that he is awake and then to try and stop Markus from freeing William who plans on ruling the world as god-like masters of a race of Hybrids.

Underworld: Awakening continues after both William & Markus are killed and both Selene and mix-breed Michael are both on the run in which they are captured, then held in a Lab. Selene is set free in which she immediately escapes and starts to look for Michael. But being in a "New world" she is confused and even more-so when she starts to see visions from what she thinks is through Michaels eyes. Selene then finds a little girl and another Vampire who supports her cause and aids her in this new battle with a new hybrid and race of Lycan's who are hell bent on trying to make a formula which makes them more powerful and immune to Silver. This also involves a Lycan which is 2-3 times the size of any normal Lycan.

Being a fan of the series, I don't really want to sound bias, but this film was a very good watch. Short, but a good watch. Entertaining and the action just didn't stop. The film rolled, there was action. When the action stopped, 5 mins later, there was action again. The film went on like this thorough the whole film. There weren't any slow bits or soppiness, just hard action from start to finish.

The film ends as if there will be more and it is likely that there will be. It would be lovely to see Miss Kate Beckingsale in her Catsuit again, but what next aye? Make sure you go see this, especially if your a fan of the series. Out Now.