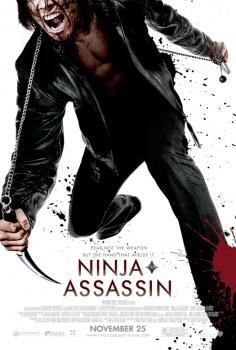 After watching this film, you'd wish you was a ninja, no lie! You will think that they are the coolest type of people ever. If you think of a ninja, you usually come up with, a guy in pyjama's running around in flip-flops with his face covered up and nothing but his eyes showing with a long sword in his hands and occasionally doing the odd run up the wall and disappearing acts with a puff of smoke. Well, Ninja Assassin is like, all of that on steroids. I'll explain.

Raizo (Rain) is a child being raised by the Ozunu Clan who are to the world, nothing but a myth. Growing up in the temple where they train young children to be deadly ninjas, rain was subjected to a lot of discipline and training which left him with scars all over his body and nurtured him into being one of the worlds deadliest Special Forces Ninja Assassins.
When Mika Coretti (Naomie Harris), a Europol Agent starts to investigate political murders that are linked to the Ozunu Clan, not only does she steal files to find out more about this mysterious clan, the clan find out and come out of the shadows, literally and make an attempt to assassinate her before the truth comes to light.

So the story sounds a little far fetched, I mean who believes in Ninja's that come out the shadows and use death-stars, booo. Yeah, well, after this film you might want to keep away from shadows as these guys do not hang about and they do not play.
The fight scenes are enough to keep you on the edge of your seat and watching hoping to see more ninja activity. There were times when I was watching thinking to myself, these are NINJAS your shooting at, are you dumb? But I guess ninjas are trained to be a certain way, but doesn't make them not human. In addition to the fight scenes, most were in a dark surrounding/environment which made it slightly hard to follow and special effects used to a degree that the fight scenes may not have looked as real if done in a lighter setting. I'm not saying they were hiding the strings, but the dark settings added to the atmospheric feel and well, a ninja wouldn't attack you in broad daylight as it would defeat their purpose, I guess.
There is a lot of blood too, a lot of it. So much deep red blood spilling, pouring and spitting out of joints, limbs and flesh, I thought I was watching a Vimto add for a moment.

The film is a decent film to watch and there are funny bits and I guess you kind of know how the story will go and how it will end, but who has seen people come out of the shadows and keep people then disappear back into the shadows like they were never there before on film? Or Bullets VS Death-stars?
If you like martial arts movies, a cheesy storyline and a lot of action, then this is your movie. And remember what I said at the beginning, you'd want to be a ninja after viewing this.