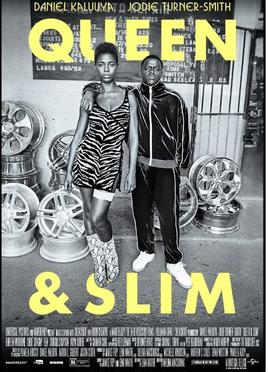 It is nice to learn of Black actors who are NOT your Samuel L. Jackson, Denzel Washington, Forest Whitaker or now, Idris Elba coming up.  We have a Michael B. Jordan, Chadwick Boseman and now, a Daniel Kaluuya.  Strangely enough, the last ones are British and are doing soo well in their field.  I learned of Daniel from the Movie 'Get Out' and I recognised him from an episode of 'Black Mirror', and although his character was weird and intense in that show, I've come to realise that Daniel and his efforts in acting, the way he has honed his craft is simply phenomenal.  He didn't do much in Kick-Ass 2, but in this movie, he showed a side of him we have never seen which also helped to elevate this movie to such new heights.  I'll explain.

Queen (Jodie Turner-Smith) and Slim (Daniel Kaluuya) is about two people who meet each other, get into a altercation with the Police, end up shooting the Police and then going on the run, the end.

It is really that simple, but for obvious reasons, I cannot go into any more details due to spoilers.  The story has a background of complexity woven throughout it and the characters themselves have layers that slowly get peeled back during the course of the movie because they are both two completely different people who have lived different lives.  Whilst one is religious and would pray before eating food for example, the other was not religious at all and there were reasons behind their behaviour.  But this is a character driven film and not about a gun-ho couple driving through the US murdering people.  They are not trying to seek revenge for all the wrong-doing going on in this world committed by bad people or glory; they are just two people who are thrusted into a situation and only really have each other.

If I'm going to be brutally honest (in which I am in all my reviews), this movie was an oxymoron for me.  I absolutely hated it, but I loved it at the same time.  The content was dark, the film was intense and I was on the verge of tears the entire movie, but the film was also very colourful, vibrant, soothing, calm and at times I was happy and smiling.  The soundtrack alone is amazing.  There were funny elements in this movie yet, there were moments I was soo angry, by the end I couldn't hold back my tears any longer.  I could identify with these characters and their situation.  I could feel their struggles.  It is bad enough struggling as a black person, but to then commit a murder, and the murder being a Police Officer knowing it's a shoot first, ask questions later or death penalty and/or the eletric chair, brought a realism to the movie I could relate to and was extremely sadden by.  These things are happening in the US right now.  What is known as a routine traffic stop escalates into death more often than it actually should, especially when there are no weapons, drugs or bad behaviour behind it.  Some people are being choked out, tazered and/or shot because the Police Officer didn't like a legitimate question asked.  You just need to look in the papers or online and it wouldn't take long before you found an article about a Police Officer killing a person of colour and what makes it worse, getting away with it.  I was angry and I was scared for the two of them.  For the most part, it was knowing that, I was watching two dead people living out the rest of their lives because of the actions of one Police Officer who was doing way too much and being a nuisance.  But when the layers were being pulled back and the characters were embracing their life on the run (and I say that losely) they were getting to know each other and experiencing life a little more care-free and it was beautiful to see.  Take the moment you are in now because tomorrow is never promised.  By the end of the movie, my defensive walk crumbled and the tears came streaming and this very rarely happens.

Other than that, the movie was acted well, shot well, the dialogue was great.  I mean, for first time writer of a movie and first time director of a movie, this film is up there.  Jodie was also great.  This is the first I am seeing of her and I didn't even know she was a model, but you could tell because she moved with grace and she has a model look.  I could understand people might want a Thelma and Louise or Bonnie and Clyde, but this movie is way bigger than that.  It just isn't that kind of movie as it is something that has a message which isn't necessarily about race or cop killing, it is bigger than that.  The impact you have on others.  The need for Justice.  The need to be loved.  The need to just be you and free.  I definitely recommend this and it would be nice if an Oscar was won.