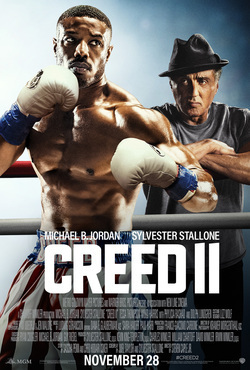 I was thinking, do I put the number “2” or the Roman Numerals “II”.  Considering this is based off of the Rocky Franchise (a franchise I haven’t seen all the way through – yeah I know), I thought I should continue this as they did and honour the Rocky Franchise.

Anyway, if you didn’t know, Creed is a spin-off movie based off the Rocky Franchise that stars (Michael B. Jordan) as Adonis, Apollo Creed’s son of whom died in the ring at the hands of Ivan Drago in Rocky IV (I almost typed the number).  So, where the first film is about Adonis making a name for himself and becoming the champion, this film is about Adonis, now the champion, is faced with the family who were responsible for his father’s death by fighting Ivan Drago’s son and centres on what both fighters are now fighting for, their motives and how ultimately, what it would mean if they were to lose.

Ryan Coogler is a great Director.  I am scared to watch Fruitvale Station as I heard and read that it is a brilliant film but very saddening, so I don’t want to cry my eyes out.  He then went on to direct Creed I and then Black Panther.  He is now 3 for 3 and was unable to direct Creed II due to filming Black Panther and prepping for Black Panther 2, so he was executive producer and brought on director friend, Steven Caple Jr. who has directed a few TV Series episodes and a few films.  As this is pretty much his first big budget movie at 50 million, I’ve got to say, although he is no Ryan Coogler, Steven Caple Jr’s directing is sound, smooth and splendid.

Whilst watching this film, Michael B and Tessa’s Chemistry is excellent, absolutely flawless. You believe they have been together a while, they love each other and that they are growing together.  Something to aspire to in a relationship soo raw.  You just like seeing them together and their relationship bloom.  As stated before the directing is sound and is a very smooth transition between the directors.  There isn’t a lot of long shots if any, like how Coogler has in both Creed I and Black Panther, so trying to identify any visual or directing tropes from Steven is still unidentifiable at this time, but with that said, I don’t see how Hollywood will not be asking him to come back to direct more movies as he knows Ryan and Ryan is a part of the Disney’s umbrella due to Black Panther, so it is fair to say that he could be asked to direct some Star Wars Mandalorian episodes to further build his credibility as a director (if needed – probably not due to this film), but with the character building and emotional scenes in this movie (I was close to tears in some parts – maybe due to personal reasons), Steven is a very capable director.  Visually, some of those shots, the fighting with the punches etc, I was holding myself as though I felt them too with a few exclaims.  Sound, Visuals, Acting, everything is superb; and the film runs as smooth as butter, in which I cannot stop reiterating.  Oh, and before I forget, it has a montage. Even Rocky has a montage.....montaaaaaaggggee.

If you can, go and watch it.  If you enjoyed the first one, you are bound to love this one, even if it isn’t directed by Ryan.  However, for me personally, I am very interested in seeing what else this guy Steven has up his sleeve.