(film review) - The Guardians of the Galaxy Holiday Special 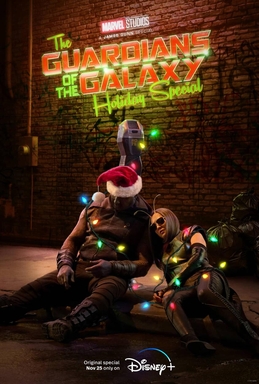 The Holiday Special centers around the Christmas holidays and cheering up Star-lord aka Peter Quill who seems to be down around this time due to Gamora not being around. Both Mantis and Drax set out on a journey to Earth thinking they have the best idea to help bring a smile to Peter's face by bringing him a present from Earth, something he loved as a child, by hijinx ensue.

This is a short and delightful film. It explains a lot that has happened since Endgame and I can only assume, it lends a help-in-hand to not having to explain anything in Volume 3, but the film also helps to flesh out the characters of Drax and Mantis a lot more. As Mantis was introduced in Guardians Volume 2 and we also saw her in Avengers: Infinity War, we truly get to explore more of her character here and her dynamics with Drax.

Charming and funny. I loved watching this as I had a right ol' giggle at these characters. Drax should be one of the only people who will bring the jokes because Volume 2 seemed like everyone had a joke and that ruined the movie for me. I do lowkey think Mantis is by far one of the silent killer scene stealers who provides the most laughs. Introduced in Volume 2 and we get to see her in Infinity War, if you simply just watch her, she does things in the background which is hilarious. Her angry face when Star-lord says, "let's put on our angry faces", when she is creeping forward when the Guardians are creeping on Nowhere, on Titan bouncing around in zero gravity, she is absolutely hysterical. Drax on this occasion has evolved and he is a lot better. He is more of a team player and also funny, you know like he should be. Bautista owns this role so it would be a shame to see him go after Volume 3.

The prize for Quill is hilarious and while I am not sure of the actual mechanics of the MCU at this point, the gags are great and the film helps to provide a warming sensibility to it whilst telling a story about one person's experience of the festive holiday and the friends who come together to help cheer him up, endearing and sweet.

It goes without saying that the visuals are immaculate. The music, is even better. The intro music was terrific and the practical effects were also good. At this point, all the actors know who their characters are and the performances show this. This is definitely, a rewatch, but it would be very interesting to see what happens in Volume 3 because I have heard, this is the last time we will see this version of the team, together and with a new trailer for volume 3, which has to be dropping soon, I just love this team. They may seem incapable of anything, but let us just remember, they took out the Avengers swiftly in 'Infinity War' and that should definitely tell you something about the team's dynamics and poise.

You can comment down below to enter discussions. Thank you for reading, Subscribe and Spread the word! - Get your ReelReeviews, right here!