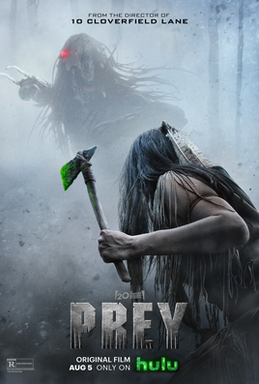 Some of you might not know about the original Predator movie starring Arnold Schwarzenegger. It was a very long time ago where some of you may not have been born. I only know about it from my cousin who was older than me but if I remember correctly, the Predator movie is a macho man 80's classic. A team in the jungle being picked off, one by one by an unknown enemy. Like I said, it is a classic. The film spawned a few other movies, Predator 2, which was not as great as the first but was alright, but a lot better than anything that came afterwards. Predators was OK and I might even have a review of that on this blog site, but when they started introducing the Alien franchise with Xenomophs, the Predator franchise got diluted and washed up. So calling this movie Prey was a step to somewhat remove itself from the Predator name, something we are all pretty much disgusted by at this point, to bring us a movie within that world and take it soo far back into the past, it is before the events of the first classic Predator movie we know and love. But was that a good idea? Is the film any good regardless of the slight disassociation? Is this film any better or worst than the previous movies that came before it but after the initial two since the 80's. Yes, yes and YES!!! I'll explain.

Naru (Amber Midthunder) is a young expert tracker from the Comanche Tribe who is trying to prove herself as a capable hunter. However, while her brother is the only person who will give her the chance to do so, the others believe she cannot and should stay back with the tribe. After noticing tracks that do not seem like normal everyday wildlife and finding animals that are skinned in ways unknown, Naru tries to tell the other members of the tribe, but she is not believed until The Predator picks them off, one by one.

Although I made attempts to watch this movie a few times on Disney+ (when I was too tired, why I did this, I do not know) when I finally got to the end of the movie, I loved it. The only thing I did not like, was the constant repetition of, "I see something, it is not a bear. I saw it, it is not a bear" and people not believing her and thinking she is talking nonsense. Whilst this is something that happens in the movies like this all the time, it annoyed me how much times she had to say it only for no one to really support her and back her up. He brother was supportive to an extent but I felt like while he was not dismissive, he still did not support her claims.  Another thing I did not like, was some of the forced dialogue and a few forced scenes, but other than that, the quality of this movie was great, from storyline to pacing, to music, to visuals.
The visuals in this movie is absolutely great. You get a grand feel of the great outdoors as the lands look beautiful as well as cold. There were a lot of visuals of the hunter and the hunted in this movie between different animals and I loved that. It was a reminder that in the wild, different insects and animals eat each other for survival. It also played a part in the storytelling for the movie. Whilst there were a few contrasting shots and a wilheime scream or two, when the 'intestines hit the fan', was when they try to capture the Predator and just when you think you have him, it was at that moment, you realised, that you messed up. Blood, guts, anything and everything, EVERYWHERE and it was marvellous! You get to see the full range of the Predator and it is glorious to see.
I remember when this was announced and while I was sceptical at first, the execution of this movie is how those previous movies should have been. Lower budget, personal and with little spectacle, because although as an audience, we love spectacle, sometimes a quieter and more intimate movie like this can work soo much better with a half-decent script. Amber Midthunder carried this movie on her back and she did a great job. I would not expect a sequel in this but. another quality Prey/Predator movie is needed to wash away all the trash from before.
You can comment down below to enter in discussions. Thank you for reading, Subscribe and Spread the word! - Get your ReelReeviews, right here!