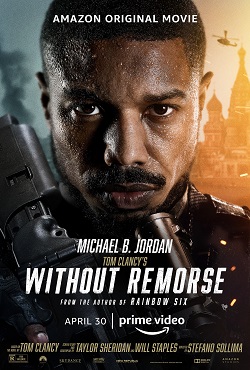 Wallace cannot do anything wrong at the moment as the calibre of his acting seems to outshine any movies he is in.  Without Remorse is not a terrible movie, but it IS NOT something we have NOT seen before.  A man out for revenge.  What is more important or what will make these types of films stand out more, is the approach.  Let's take John Wick for example, stylish, every shot is a head shot or eight and it alludes to a grand universe with lore and background as the movies went on.  John Wick seems rich within the world it is in whilst remaining gritty and hardcore.  This movie, whilst nothing like a John Wick and thankfully, nothing like a Max Payne, Michael gives us what he can with a post credits scene hinting at more to possibly come.

Senior Chief John Kelly is in the US Navy SEALs and as part of a rescue mission in Syria, but due to withheld information or the wrong intel, the captors ended up being something they weren't.  This eventually leads to all the members of the rescue mission being killed including John's pregnant wife as collateral damage.  When John makes a recovery from his attack, he vows to seek revenge without remorse taking matters into his own hands as he is one of, if not the best US Navy Seal there is, but with the mistrust from the Syria rescue which resulted in his wife being killed, John takes on a mission to seek the truth around people he is unwilling to trust.

This film is nothing special but it does have some really great scenes in.  From the opening scene, the house scene is also great.  But the best scenes in this movie are the flaming car scene you see in the trailer, the prison scene with the sink and the aeroplane scene, especially the aeroplane scene, you'll know it when you see it.  However, with a bland story, these scenes only do just enough to make this film entertaining.  Camera angles, sets and while the mystery has much to be desired, I feel the villain was too obvious which let the film down.  I believe there should have been possibly an extra 20 - 30 minutes added to the movie to add some more twists and intrigue, but from the moment you see a specific actor, the movie pretty much lets you know what is going on.

Michael B. Jordan is excellent in this and next to Michael is Jodie Turner-Smith who also helps carry the movie and seeing her in some action was nice to see a black woman, in the military, high ranking and in the field.  I feel like I have not seen that before.  Two black main characters with Jamie Bell, who is always great, make this film really watchable and it is a hope that these three characters can come back for future movies.  The post credits scene alludes to that and it is a hope that maybe they will go bigger and better next time around.  As these things are adapted from novel's it might be best to add that little bit more to them or if there are bits cut from a novel for the film, to add those bits or vice versa.  There needs to be a bit more to these movies because as well they may read on paper in novel form, translated into movie is ok, but in some cases and especially this case, is just not enough.  No one really wants to walk away from watching this movie saying "it was alright!" especially with the calibre of these superb actors.