(series review) [STREAMING] - The Falcon and the Winter Soldier 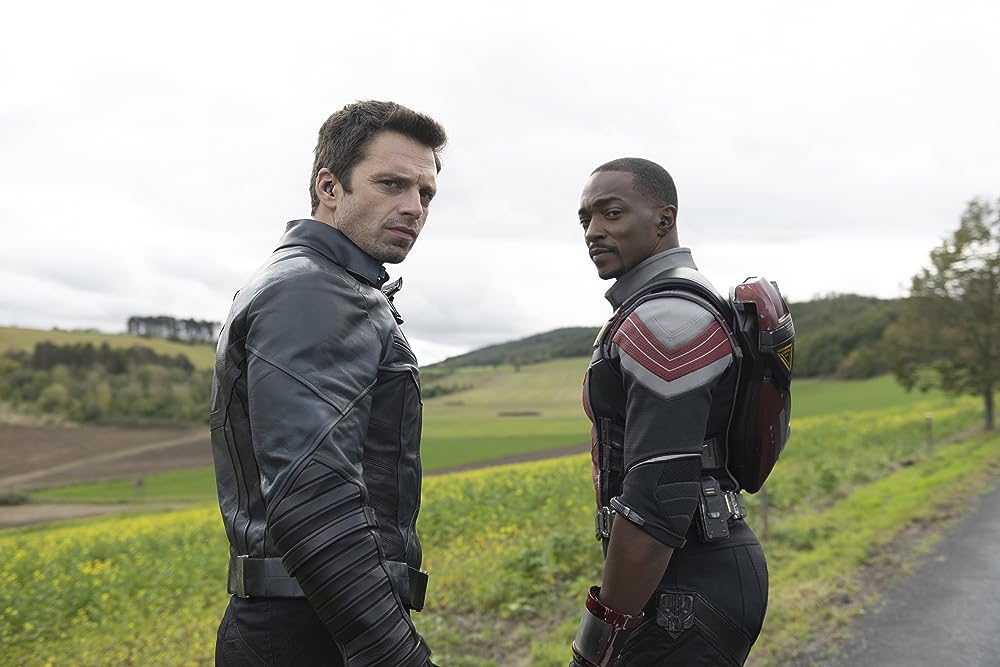 This is essentially a 6 hour movie broken down into episodic chunks that picks up after the events of Endgame and where having now come back, fighting a huge war, the mourning of the loss of a friend/teammate, The Avengers have essentially disbanded and The Falcon is back in the Army on special missions.  Sam Wilson, now with Captain America's shield believes the only way to honour Steve Rogers and the Shield is to hand it to the Smithsonian to be apart of the Captain America Exhibit.  While this seems to be a great idea at first and the Government are all for it, but it doesn't take the Government long to appoint a new Captain America, shield and all. 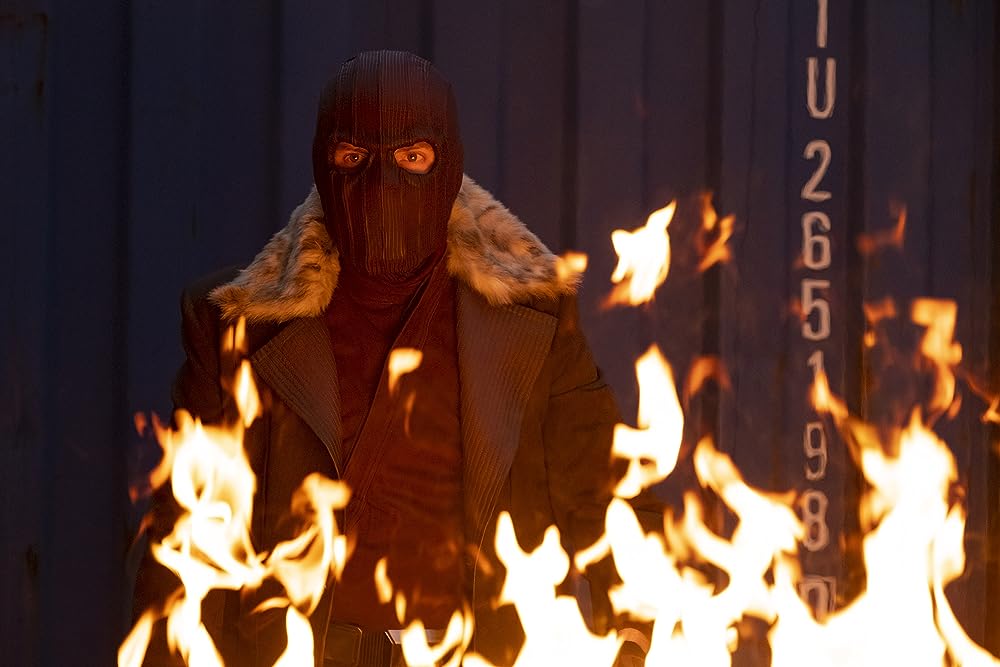 The Winter Soldier, post the events of Endgame has been pardoned conditionally by the government and can live out a somewhat normal life.  He is seeking counselling as part of his pardon and is trying to make amends where he can.  But after having seen a new Captain America appointed, James 'Bucky' Barnes makes contact with Sam with grievances as to why he would "simply" give up the Shield which is now in the hands of John Walker the new Captain America.  This confrontation leads them on the trail to "terrorists", people with supersoldier-like abilities who call themselves The Flag Smashers.  In a confrontation with The Flag Smashes, the New Captain America and his "side-kick" Lemar Hoskins aka Battlestar joins the fight which leads to him stepping on toes.  As the show goes on with both Sam and Bucky trying to figure out the mystery of where the serums are coming from to make super powered individuals, leads them to characters like Zemo, The Powerbroker, Isiah Bradley and the many secrets behind the actions of the government and what it means to be Captain America and to hold the shield.  All this is compounded with the Flag Smashers actions and threats headed by their leader Karli Morgenthau.  Chosen by Steve Rogers for a reason, can Sam do what it takes? 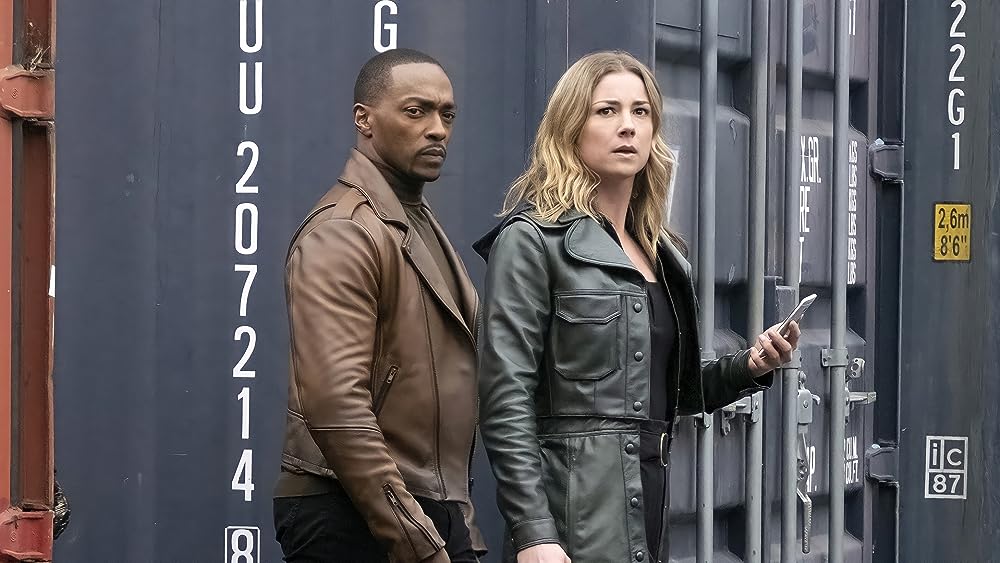 This show, although it was meant to be the first TV series out of the gate last year until the pandemic hit forcing Disney to restructure the show's plot and their TV shows, Wandavison came out first.  I'm not sure if this was a stroke of genius or the only card Disney could play but during a pandemic, Wandavision was a breath of fresh air.  Wandavision has or at least, seems to have had a better track-record with audience participation due to the sheer quality and delivery of the show.  The show was brilliant keeping us guessing from episode to episode, everybody was Mephisto!  That does not mean The Falcon and the Winter Soldier is rubbish or pales in comparison, it just means that TFATWS delivers the classic and already tried and tested Marvel formula with added grit and touching topics a Marvel movie may briefly skim the surface of.  The show is deep rooted in comic book history as well as real life history while it touches on racism in America and some might argue, today's Black Lives Matter movement, although I don't subscribe to that as I believe it touches on racism as a whole and how we view people.  It touches on what we deem as politics with labelling issues we do not wish to address and shove under the rug with labelling, how people see the government, how the government see people and how certain people see people.  The show is very very layered touching on these themes which I'd only like to hope will help open the eyes of the viewers and real life events and situations the plague our society now.  The Irony I saw in this show comes with comments such as "TFATWS is too political" in which I would question that statement with, "what makes the show political for you?"  There is a speech near the end of the show, slightly heavy handed in it's delivery but touches on the very nature of people's thoughts on matters they do not wish to go into and discuss.  Labelling something political doesn't make it political, it makes it an issue and something you are not willing to address and stay ignorant to, that doesn't make the problem/issue magically go away. 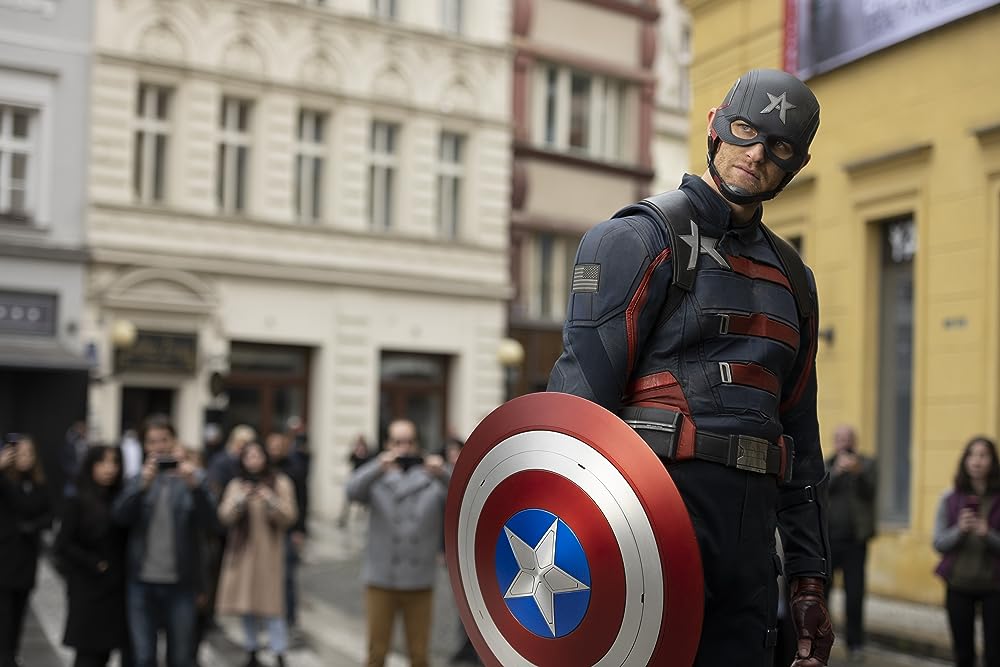 Anthony Mackie as Sam Wilson and Sebastian Stan as James Barnes are both excellent in this. The pair do a lot of acting without even saying a word and whilst there are some very very powerful scenes, the quiet moments or quiet storytelling and the comradery between them help deliver such a bromance we saw glimpses of in Captain America: Civil War.  Daniel Bruhl's character as Zemo is somewhat a scene stealer whenever he pops up, but if there was anyone who deserves as much credit as Anthony and Sebastian, is Wyatt Russell as John Walker.  This is also a story for John Walker as well as Sam and without going into spoilers, seeing more of John as the show goes on and how time will go on, will be great because the evolution of his character and how he is portrayed is like watching a train-wreck.  Erin Kellyman, although somewhat typecast is also great, but it would have been nice to see or understand a bit more of her backstory as it seems elements were cut due to the 2020 pandemic and shifting part of the narrative.  There are action scenes a plenty, but from the introduction of The Powerbroker, wondering who that person was, was a weekly guess, but we are talking about a buddy cop superhero action adventure soaked in espionage, so it would be nice to se if we could see a lot these characters return at some point and that Mephisto is in fact, the Powerbroker.