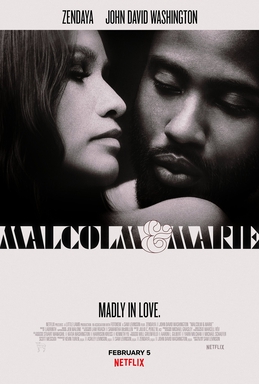 This was a surprising film in many ways.  To learn about, as I never knew about this film until it was a few weeks from being upon us.  The actors involved, one hot off of a Christopher Nolan movie which was more of a mind-twist than anything and another who was noted for her brilliant performance in a TV show also directed by Sam Levinson, Tenet and Euphoria respectively.  I'm not a romantic movie-goer either, so this movie didn't really strike me as a must see, but having these two great actors, I thought I'd give it a whirl.  And how was the movie? Well...from the trailer, a little of what I expected, but also, not. I'll explain.

Malcolm (John David Washington) is a black film writer-director in the industry who arrives home with his girlfriend, Marie (Zendeya) after his film premier screening.  Glowing and on a natural high from the emotional responses and feedback from the screening, Malcolm waits in anticipation for the critical reviews but when he notices his girlfriend not glowing with as much enthusiasm as him or seemingly displeased and slightly distant, he challenges her and as reluctant as she is to address it, when she does, an argument ensues.

This film, as beautifully and artistically shot it is, this film is beyond ugly.  Possibly ugly enough to drive the viewer away to want to watch something else instead.  This film does not hold back any punches as it capitalises on the very raw elements of any "relationship" labelled a relationship and anyone in one and the real arguments that can happen within them and how often AND repetitive they can be.

The real stars of this movie are the actors.  They were powerful and engaging.  The verbal blows felt like heavy weight punches and the music complimented the artistry of the scenes and shots.  Sam did a great job with making this film feel sexy in places, but also claustrophobic and overbearing even when the home in itself felt spacious.  I felt the movie did well to show how some women are overlooked and unappreciated in life, whilst the man basks in all the glory without even acknowledging her efforts in the entirety of the process or his journey.  It highlighted his arrogance in a way, complacency and neglect and when challenged or felt attacked, he would hit back with very ugly and toxic energy.  Home truths that felt like he has held these things over her head ever since he met her.
I also felt the movie did well to highlight her insecurities to an extent, the need for validation, the need for security, the need to feel respected, but most of all, to have acknowledgment, but also showed us, as damaged and insecure she may have been and with all her baggage, her worth was more important because without her being who she was and what she had been through in life, Marie wouldn't have been an inspiration to him to write and direct such a great film, judging by the responses at the screening.  The film reminded me of the saying, "Behind every great man, is an even greater woman".

In some respects, the film does feel repetitive and does feel like it drags in places because the entirety of the movie is one big argument essentially - "why are they going around in circles", but real arguments in relationships can be like this and any relationship worthy of that title would have experienced some type of ugly argument, something that isn't usually captured on film like this and usually because they stem from bottled up emotions or just not having those uncomfortable discussions.

The movie is very polarising and as un-pretty it can be at times, at the heart of it to me, is acknowledgement, understanding and communication, something we all fail and repeatedly fail on in relationships day-to-day and will always fail on.  Some due to complacency, some due to arrogance and ignorance, but mostly due to sometimes just not acknowledging the people who have helped you on your journey.  Being a man, sometimes it's easier to thank those outside of your immediate unit but not because it would be difficult to thank those inside, but some things go without saying, but for women, it's more to do with the saying than not saying, if you know what i'm saying.

I'd say to watch with caution especially as I'm not even sure if the film ends with a happy ending or not...it kinda just ends.  And definitely not a Valentines Day film to snuggle up to...lol