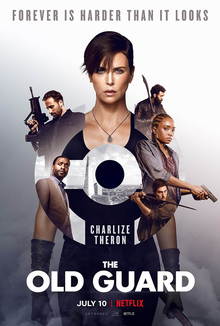 Charlize Theron has been around for a minute and although I already knew of her from Aeon Flux and one or two others, she really popped onto the scene as an action star, more from Atomic Blonde and Mad Max: Fury Road.  I absolutely LOVED Mad Max: Fury Road and Atomic Blonde was actually good too.  Not many people went to see it but there is a great stairway fight and although there may have been hidden camera cuts (Movie Magic), Charlize really sold that performance, plus I love me a continuous shot.  The Old Guard was a bit of a surprise for me if I'm honest as it seemed to come out of nowhere because I never heard much rumblings about it until only a month or two before it came out and now that it has dropped, I will say, the film has moments where I felt they could have done better, but overall, I really enjoyed it.

The Old Guard is about a team of Immortals who carry out missions fighting for the greater, or a cause they deem "the right cause".  Being immortal makes them knowledgeable and very efficient in what they do having doing it for years.  However when a new member joins the team in the midst of a secret manhunt, Andy (Charlize Theron) and her team must track down the new recruit to keep her safe, but also fight for their own lives.

The story is decent as it had some lore and a little back story.  Although they do not go into much specifics on their abilities and how they came to be, I'd assume they would pick that up in a sequel, if that is honoured to them.  The action is great and seeing the team work as a team was phenomenal, especially in the third act.  I really like how they handled the final fight and I was intrigued with the post credits scene, although, it was telegraphed a mile away, so you can assume what the sequel might/would be about.  Although the acting was great, especially from the new recruit Niles (KiKi Layne) whom I haven't seen in film or recognise, I just felt that some of the dialogue was misplaced and clunky.  There is a scene where Niles says to Andy, "Who are you?" and it came across as more relaxed/inquisitive than scared and concerned, considering the circumstances.

Stephen Merrick (Harry Melling), was ok for the most part, nothing special and nothing ground breaking or compelling about his character.  Ruthless, egotistical and somewhat cartoonish, following the riches, where James Copley (Chiwetel Ejiofor) was a much better and well-rounded character where you understood his motives and why he was doing what he was doing.  It was great seeing Micheal Ward in the movie, he got a little screen time, but as a whole, I loved the variety of actors from different backgrounds and hopefully in a sequel we get to see more of these characters and possibly open the world up like how John Wick did with The Continental and lore.

Speaking of John Wick, this film is somewhat choreographed like John Wick but has some Matrix elements, Handcock elements and I guess you could say Universal Soldier elements to it.  If it isn't clear, I do believer the film could have been executed a touch better in a few ways such as a few better shots for the cinematography, more stylised shots and camerawork and better dialogue, but if anything, these are things that can be rectified in a sequel.  For example, there was a shot at the beginning of the movie which was of the country Sudan.  Loved the location card, the shot of the family walking was lovely, but I felt the pan and scene could have looked more exotic or visually stunning.  This movie was probably made for a pack of peanuts, Chips and a Capri-Sun, but it doesn't look like it for the most part and Netflix ought to make their money back to do another or at least I hope they do.  It would be nice to get Gina Prince-Bythewood back as she did a great job.  Interesting spot I noticed, Gina is plugged for both Silver Sable and Black Cat, so if this movie gets the eyes and status to have people like myself wanting more from the movie such as a sequel, at least Sony will keep her on for those movies because she is a credible director, I mean, she directed Love and Basketball.