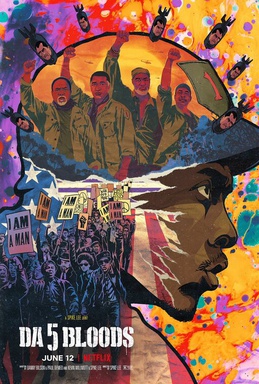 I think I vaguely remember hearing about Spike Lee doing a film based on Soldiers from the Vietnam War.  But I never heard much else about it until this movie dropped on Netflix.  Now in the midst of a pandemic, people have initially thought that if a film with great actors and a great director, then the reason the film is released on a streaming platform is because either, the film studio behind it didn't like the way it turned out so they sold it onto the streaming service, or the director who was pitching then idea, no studio wanted to buy it so a streaming service stepped in in distribute.  People would have thought that the film would be shoddy or not worth watching, even if it was from a director like Spike Lee.  The general consensus is that, streaming platforms do not have the budget or quality as main studios such as a Disney, Universal and such.  Besides, Spike has had some misses, you know, like most great directors, but this film...THIS film, that was produced by 40 Acres and a Mule Filmworks (Spike Lee's film production company) was distributed by Netflix and to say that THIS film was shoddy, lacking, or anything negative as to why it was shown on Netflix would be a grave misstep in judgement. This film was amazing.

Da 5 Bloods centres around the friendship of five Vietnam soldiers and their time in the war when they find some gold and decide to bury it.  However, on their return to Vietnam to look for said gold, war secrets become to unfold and be told as not all friends made it back from the war as some of them have still been at war and never left, so the return puts a strain on their friendship as memories off the fallen, choices and the regrets come flooding back to haunt them.

I can't say any more due to spoilers, but I will definitely say this, having just rewatched the trailer, the trailer gives NOTHING away and what you get in the film is nothing short of acting gold.  The music, the cinematography, the aspect ratio, everything is fine-tuned and done in such a way, the film is enigmatic and engaging.  Let me touch on the acting first.  Whilst I couldn't care less about some of the characters in this movie because it wasn't really about them and they played their part in the movie well, they served their purpose, the three main actors are Delroy Lindo, Chadwick Boseman and Jonathon Majors.  Whilst Jonathon was great, it was Delroy who was acting circles around everyone bar one person.  Seasoned actor, Delroy, British born, I remember him from possibly one of the first films I ever first saw him in, also directed by Spike Lee, Crooklyn with Alfie Woodard, a film that made me cry, he commanded every scene.  You felt what he was going through and you could physically see the weight he has carried over the many years.  I guess that's a slight spoiler but I couldn't really think of a way to address his acting without talking about how he made you feel and how his character is portrayed.  Chadwick Boseman...if you didn't think he was that great of an actor and his most notable performance is Black Panther, then you are dead wrong.  Known for playing James Brown, Jackie Robinson and Thurgood Marshall, all in which he played these real life people, Chadwick legit stole every scene in this movie.  When I said "it was Delroy who was acting circles around everyone bar one person" this one person was Chadwick.  His performance is soo good, there is a scene between the two of them and I'm pretty sure I welled up in tears.  Such a powerful performance between the two of them in this movie, if one of them doesn't get a Best Actor or Best Supporting Actor nomination AND WIN (especially considering what has come out this year), this would definitely be a snub.  These guys are soo soo good.
Jonathan Majors, whilst I don't really know him for much, his performance was good, but there was already very high bars to meet.
It was nice to see Clarke Peters as I initially remember him from the MCU Netflix 'Jessica Jones' series and before that, 'Person of Interest' and possibly 'The Wire', but although he was very good, the film did a good job with having him balance and steady the movie out.  The voice of reason in a way.

The music and cinematography is phenomenal and it goes without saying, Spike knew the music he wanted as much as he knew the angles he wanted.  Everything is soo well crafted, this war drama never felt more enriched and entertaining.  This war drama never felt like it was beating you over the head about the war, but more the casualties of war, because War, regardless of what it is for, is a terrible thing to go through and endure.  The different aspect-ratios used highlighted the different places in time we were watching, the war, the modern day, etc and whilst at first, it threw me, I got used to it fairly quickly.  Spike Lee manages to director a film that encapsulates what is happening now in real life and in some places where it is somewhat political, it is very relevant to the now.

I had a great time with this movie and it took me a little longer to write this review due to the current times we are in now, but this movie has a message, I just hope that when you watch it, you are able to pick that up.