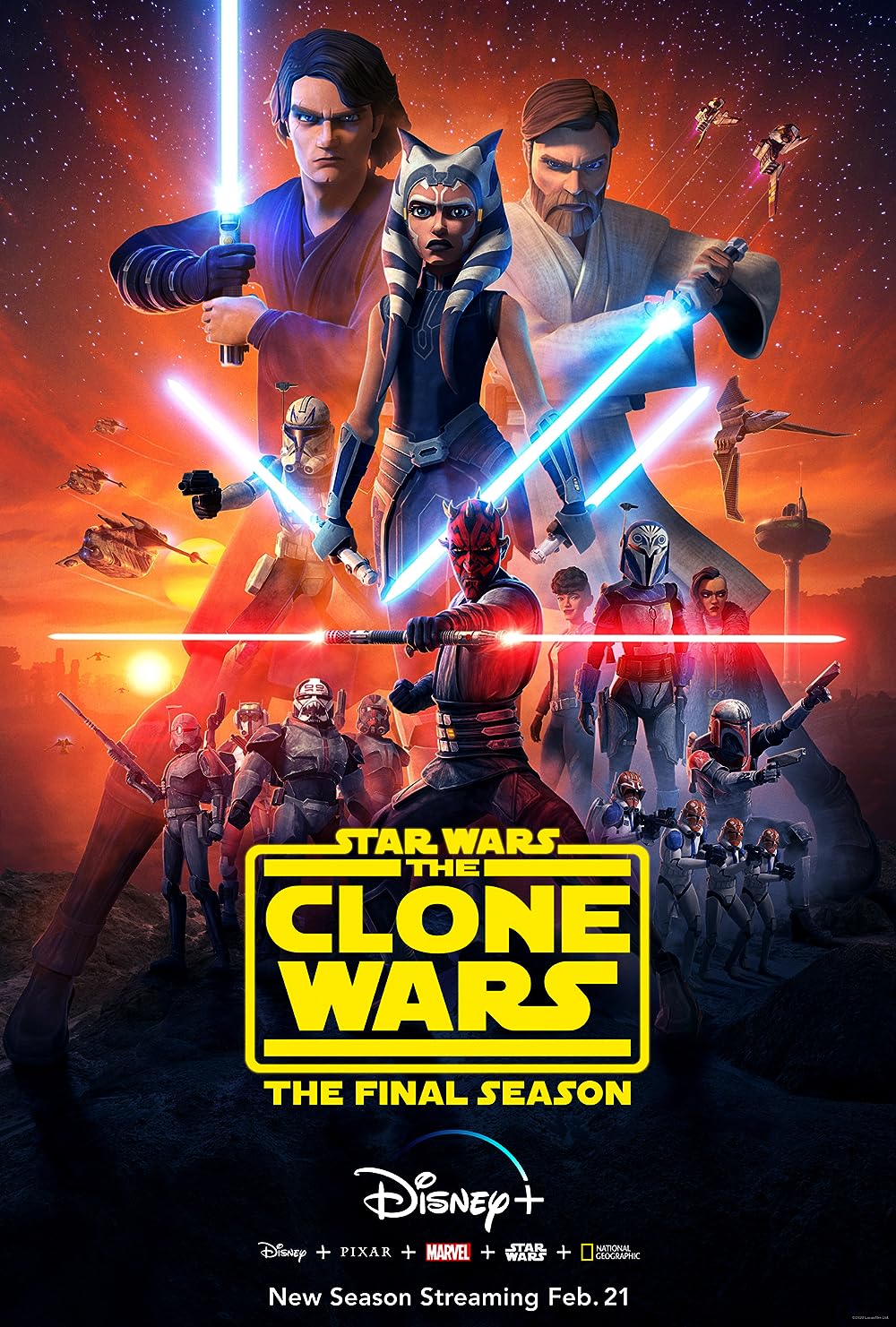 What can I say about the animated series 'The Clone Wars'?  Well, I'll say that it was something I was never interested in.  It came out at a time where, although Star Wars is for children and adults alike, I thought "why am I going to watch a cartoon series of Star Wars when I have the films".  If I'm honest, I just didn't quite get it.  But I have a love for Star Wars and the overall story of it all.  While a lot cannot tell the difference between a Star Wars from a Star Trek or know if a Klingon choice of weapon is a Lightsabre, this cartoon does a great deal to flesh out in detail what Star Wars is ALL ABOUT and most importantly, how a young Anakin Skywalker becomes one of the most notorious and world famous characters in movie history and the world.

Before I get into all of that though.  A good few years back, I got onto 'The Clone Wars' after hearing about it on podcasts such as 'Jedi Council' among other mediums and I started immediately on where we were at the time.  I believe it was Mid-Season 3 and I watched as much as I could from that point onwards until the last season, season 6.  This was around the time Disney bought Lucasfilm and 'The Clone Wars' was finished.  Although they (the creators), were not done with the story of these characters I had began to like, and now even moreso, separate from the movies.  But Dave Filoni got a chance to finish it off and he came back with Season 7 this year for DisneyPlus and I had started that too, got 4-6 episodes in and then stopped and decided, l"me start from season 1, since I never saw it".  What's the point, right? Well, I just wanted to be a completionist when it came to this.  I wanted to know about Mandelore and Ahsoka etc.  However, this does not mean I watched the separate Clone Wars movie because I heard it was trash and I simply wasn't about to get into that.  Especially as I was told you can watch from season 1, nevermind the Clone Wars movie.  Not to be confused with 'Attack of the Clones'.

Like I guessed, Star Wars: The Clone Wars is or should I say started off for children.  I mean for all intents and purposes, it is a children's show, but there are some dark elements and they do not at all shy away from the aspect of war, I mean, it's called Star Wars, right?  Though there is no blood and no gruesome deaths on screen, they manage to walk a fine line to cater for children.  The other side of that line is catering for the fans, adults and the lore of the star wars world in which they do an amazing job.  From season to season, not only do they get stronger, but the lore gets richer, deeper and graphically, the graphics and animation gets better as well.  Where I binged it from season 1 to 7, you gradually see small differences with each season and in some cases, where they applied more details because it needed it and less in other places.  However, season 7 looks amazing!!!

Season 1 to season 2 is about learning where we are in the Skywalker story.  Anakin is under the tutelage of Ben Kenobi but to help curve his duties as a Padawan to Ben, he has also been given a Padawan in Ahsoka, a younger and eager Force user.  She is meant to ground Anakin as Anakin is hot headed and always angry.  But as the show goes on, you see she can be a little annoying and that really helps the story overall especially with her growth.  You get to see the camaraderie between Anakin and Ben and although how Anakin can be hard headed and brash, he is also very exceptional as a Jedi Master, though the council doesn't appoint him as one.
You get to experience what it is like through the eyes of the clones themselves.  Each clone has a number, but every clone has a personality in which later on through the series, they are given names.

The Clone Wars is not just about the heroes though, a lot of the villains are there too.  Count Doku, General Grievous and even Darth Maul.  The latter, a real surprise and there is also a story arc that helps clear up how we get from a man severed in half to showing up in the movie Star Wars: A Solo Story.  The show also introduces other characters such as Boba Fett, Cad Bane among other Bounty Hunters, space pirates like Hondo and other Siths, such as Asajj Ventress.  You also get to see that there are many many other Jedi' and some even speak and have stories of their own.  Some are really cool and it would have been nice to see them in the movies.

Star Wars though, has mainly been about the fight between good and evil.  The lightside and the darkside.  Doing the right thing and doing the wrong thing.  War.  Politics.  War profiteering.  In this show, you get to see every cog in the wheel of the grand plan of the Sith rising and destroying the Jedi to rule the galaxy with 1 person potentially being the foil to bring balance.  The Clone Wars digs deep into all of this and helps you to understand how the shift to the darkside was not overnight.  The films are around 2 hours and although Anakin is much older in Revenge of the Sith, you don't really get a duration of how long the Clone Wars were.  You witness the grooming.  You see the parts coming together and what is happening behind closed doors with the Senate, the Republic and the separatists.  They do a great job in weaving the story in, whilst trying to make you feel engaged and involved with the characters such as Padame and Setine.

Seasons 5 - 6 is where they do a lot of explaining rules of the Force, the Jedi, rules of other factions such as Mandilore for the Mandelorians.  Not only why Darth Maul is alive but how, why and what his goal is.  A lot of characters story arcs and some of them are simply great.  For example, one of my favourite characters was, Asajj Ventress, a student of Count Doku.  She has never been seen in the films, just like Ahsoka, but she had an interesting story arc and she was a great character towards the end when we last see her.  The end of Season 5 also teared me up a little with how a specific and important character was treated.  You grow to love these characters and recognise the familiar ones.  For example, you can tell the difference between the clones and one of the plots even involved the chip for 'Order 66' and it left you wondering how it was going to be handled due to knowing how everything goes down in Revenge the Sith.

All in all, I could not recommend this show enough.  This show, not only does it successfully bridge the gap between Star Wars: Clone Wars and Star Wars: Revenge of the Sith, it expands the universe.  It's not just about Jedi and Sith, Mandalorians are apart of this as they have their own separate thing going on which is nothing to do with the separatists war with the republic.  Because the series is set in the past before the events of Episode 4 - 9 at points, you see other notable characters when they were younger like 'Admiral "It's A Trap!" Akbar or how certain characters feel towards the Jedi and why they would side with the separatists.  Everything is fully fleshed out and there is connectivity between the Skywalker Saga, the Solo movie, The Mandalorian TV show on DisneyPlus, Star Wars: Rebels (another Cartoon that came out when The Clone Wars series ended, initially) and even the computer game Star Wars: The Fallen Jedi (or maybe moreso, that game to the movies and cartoons).

Although there are some slow episode or episodes that may be regarded as fillers, it does enough to keep you entertained as the Lightsabre fights are pretty much the best in the entirety of the Star Wars franchise, they are really really good.  The cinematography is phenomenal for a cartoon and in some cases, there are a few long tracking shots and I love tracking shots.  Dave Filoni along with Jon Favereu are more or less in charge of 'The Mandelorian' series a with a season 2 out soon.  It would be a good idea to get onto this first before watching that and maybe even Star Wars: Rebels to get an understanding of what a Mandelorian' is, because it isn't just another Boba Fett.

If you can't do the 7 seasons of 25min episodes (it's really easy), you might be able to search online for episodes to watch for the narrative follow.  But me, I'd say, just watch the entire thing.  You'll get invested that way.