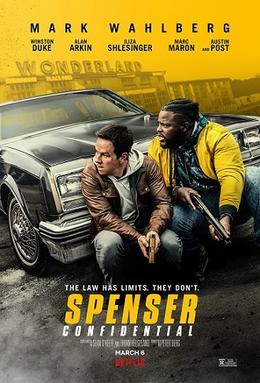 First of all, from the trailer, I was already sold on this movie, but having watched the movie, finally over 3 days because I  got distracted or fell asleep, I'm glad to say, I enjoyed it, BUT it could have been better.

Having started to watch this movie, I was definitely getting vibes of 'The Other Guys'.  Because The Other Guys is a comedy starring Mark Wahlberg and THIS is a comedy starring Mark Wahlberg and both characters are Police Officers, I think my mind may have wanted MORE The Other Guys kind of humour, so with the movie NOT having that, it deflated the movie a little for me.  But obviously, that is a personal thought as well as a personal choice.

Disgraced Spencer (Mark Wahlberg) is a former cop who beats up a fellow Police Officer and ends up doing time in prison.  Upon release, he is met with Henry (Alan Arkin) who takes him home only to find Spencer is now room-mates with Hawk (Winston Duke).  But, when Police Officers start to die not even 48hrs of his release, Spencer makes it his job to find out who is killing these cops and why.

It's not a complex storyline at all and you could probably figure out the plot, blow for blow and who the villain is just by how telegraphed the movie is with it's basic plot, but for the most part, the movie does what it says on the tin.  It's an action comedy film and it does that.  I actually found the comedy to hit.  It's also done on a low budget as I think about it,  as I'm sure there is literally, 1 explosion and hardly any special effects, but in a strange way, I still very much enjoyed the movie and had fun with it, mostly because of the humour and also due to the performances of Mark, Winston and Iliza.  Granted the last two wasn't given a lot to work with, Winston being somewhat subdue and Iliza being a feisty motormouth with attitude, so some more character development would have been nice.  But this is clearly Mark's movie, Spencer and everyone else is supporting.  I do enjoy seeing Bokeem especially as I saw him recently in 'Queen and Slim' and before that, 'Spider-man: Homecoming'.

As I think about potential sequels as the film ends alluding to Spencer getting into people's business, it would be nice to see some more movies with these characters.  Kind of like what John Wick did.  A simple premise but excellent execution.  Not to say Peter Berg known for The Kingdom, Hancock, The Losers, Lone Survivor, Deep Water Horizon and Patriots Day, I feel his directing wasn't excellently executed unlike other films he has made in the past, although, leagues better than Battleship.  I mean, as we won't really know how much this movie makes... Netflix, if you enjoy it, spread the word as it's on Netflix and if anything, let's say it makes between 35-50 million, they must be able to do a sequel as this movie is at least half that to make.  Maybe in the sequel, we could have more character dynamics and witty banter.  Oh and especially more Iliza.