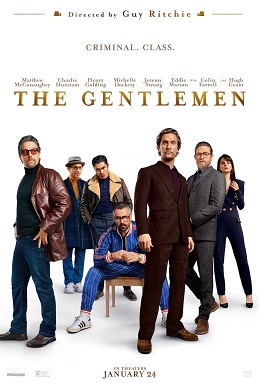 Guy Ritchie has always been one of my favourite directors. Not because he is British, but because his films are intelligent, fun and pack enough elements to make for an interesting movie.  Unfortunately, I do feel that Guy has taken a departure from what he became famous for.  Films like 'Lock Stock and Two Smoking Barrels' and 'Snatch' are seen as his greatest work.  He did 'Revolver' and 'Rock n Rolla' and those didn't come as close to the brilliance of Snatch and Lock Stock, but Rock n Rolla' was really good when compared to Revolver.  Guy also did a bunch of other films but other than, 'Man From UNCLE' and the Sherlock Holmes series, people including myself wondered if Guy still had it.  Aladdin was good.  Aladdin made over a billion, but Aladdin ISN'T Guy Ritchie.  So, what about this new movie called 'The Gentlemen' which looks like it could deliver to us the Guy Ritchie from Lock Stock, Snatch fame?  Is this the return of Mr. Ritchie? I actually think so.  I'll Explain.

The Gentlemen is about a man Micky (Matthew McConaughey) who has built his success and wealth from the growth of weed and distribution in a time where very few people were doing it.  As a drug kingpin who wants to retire and leave it all behind, word gets out and people come from all over to take over his business.  But in the mix of it all a reporter is trying to get the scoop on how Micky became the successful business man he is by also trying to link situations that has happened and piecing it all the information to build the full story.

I almost gave away a few plot points trying to write that because this movie is soo cleverly done and soo all-over-the-place, you will find it difficult to understand the direction of this movie for a moment only to have Ritchie bring it together.  Imagine watching someone draw or paint a picture and you know what the picture is meant to be they are drawing, but they start with the most irrelevant images or sections of the painting and go backwards and forwards to other parts of it so whilst you are watching the mastery, you are trying to follow the artistry, but as soon as you think you begin to see the full picture, you are led in a different direction thinking, maybe you were wrong about the direction you had previously thought, only to be led back.  It's magic and Guy did it again!

The acting in this movie is superb.  Everyone has a role to play whether small or big but the dialogue is also great which brings us to the Snatch and Lock Stock days. Great cinematography and great scenes.  Colin Farrell, Charlie Hunnam, Michelle Dockery and Henry Golding were excellent. Huge Grant was out of this world and I loved it.  Even UK Rapper Bugsy Malone was decent and a shock to see to be honest.  But who was an even bigger shock, was Franz Drameh from 'Attack The Block' who seems to have been relegated to background character like who he was in 'Edge of Tomorrow'.  It was a little upsetting, but he isn't doing too bad in AppleTV's 'SEE' with Jason Mamoa and to be in a Guy Ritchie movie, that's something.  Would be nice if some of these characters could come back for a possible sequel.

I'm not sure if I could gush about this movie any more without giving away spoilers.  I left the cinema happy and pleasantly surprised wanting to see it again because it felt fresh or a lovely rendition of something we have seen or experienced before but with more than just a new coat of paint on it.  Maybe something 'The Force Awakens' kinda did, but didn't.  Yeah it's Star Wars, but with a new coat of paint.  This is, yeah it's Guy Ritchie, but he has levelled up.  Not only is the new paint great, but everything else has got a considerable lift bringing enjoyment in every way visually, with the dialogue and with the story but maintaining the Guy Ritchie stamps without it feeling like a rehash of something old.  And to say this film is funny, is an absolute understatement.  This movie is hilarious and exactly what you'd expect from this type of Guy Ritchie movie.  Let me not even go into the music side of things...#sigh.
There is NOTHING bad with this movie and I really do hope Guy is currently drinking some Earl Grey writing a sequel because it IS very well needed.  And if not a sequel, how about just another hit movie like this to be his Snatch to his Lock Stock.

Ok, this JUST came to me.  IMAGINE, just imagine..., Guy Ritchie brought back some of the survivors and older characters from Lock Stock, Snatch and Rock N Rolla' in a sequel to The Gentlemen or anither film and made it one big shared universe.  I dare you to not to geek out.

Watch it, you'll love it!