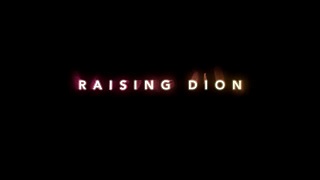 You'd think by now we would be oversaturated with comic-book movies, shows, etc and we'd basically see another one and physically vomit from reading the synopsis, however this one does something we haven't quite seen yet on TV.  Well, at least from what I have seen, thus far. The series ‘The Boys’ brings drama and action in a dark and gritty world with dark humour, whilst ‘Umbrella Academy’ brings drama, action with a family dynamic accompanied with a bit of humour and comic book absurdities.  As for this one, Raising Dion on Netflix, not only brings THAT with fantasy and adventure included, but leans heavily into family drama and isn’t about a bunch of adopted kids (family).
I stumbled across this on Netflix and I saw a little chatter online regarding it.  Kid with super powers, whoop-ti-doo.  But I thought I would give it a go and see what it was all about.

Nicole Reese (Alisha Wainwright) is a woman who is Raising Dion (roll credits), her son (Ja’Siah Young), as a single mother after her scientist husband (Michael B. Jordan) is killed in a freak storm.  As this becomes increasingly difficult with the loss of her husband in whom she misses dearly, things become more strenuous when she discovers her son has now got superhero-like abilities.  Knowing this to be a problem, Nicole tries her best to keep her son’s powers a secret especially when a shadowy organisation grows interest in little Dion.  With the help of her deceased husband’s best friend Pat Rollins (Jason Ritter), Nicole does what any good parent would try to do…and that’s keep her child safe.

This 9 episode show was good and I really enjoyed it.  In places it slowed down and in other places I felt it added scenes that were character building, but I was disinterested.  I understood the reasons behind them but I already understood what the showrunner and director was going for.  A mum struggling trying to raise her child in a world where being a single parent is difficult as you are not likely to have that support.  Not to say they were beating you over the head with it, but I think I just wanted something else.  Also, that having no support after having a child can also halt your dreams.  Life gets in the way sometimes.

When the series was finished though, not only was I in shock by the penultimate episode and the very good ending (obviously leaving you wanting more), the show ends with a “to be continued” feel, without having the words displayed.  I was also very keen on the age the child was when they started filming as I would like for a sequel to play out in “real time”.  An example, if the child was 8 when filming and the show came out two years later (hypothetically), then it took another two years to green-light and make another, if the child is 10, for them to explain that season two picks up 2 years later where the actor is 12 playing a 10 year old, so on and so forth.  I believe this way, as the child gets older in real time, we don’t end up having a child looking too old for the role and recasting as I would like to see where this story could go, considering his powers and the content.  I do believe it would be interesting to see Dion in his teens with his powers.  With that said, the content, I would like to see if there are any other people with powers and if more powers get revealed over the course of the series with bigger, badder and more dangerous threats so that Dion can truly turn into the Superhero he wants to be.  Plus we could use the same actor as other than a mischievous little boy who doesn’t listen, I believe Ja’Siah was good in the role.  Alisha was great playing the mum and Jason was also great playing the Godfather to Dion.


If you are interested in superhero shows like this, although very different from The Boys and a little younger in age bracket than Umbrella Academy, this is still a very decent watch with great special effects and a brilliant “no-name” cast which is also all-inclusive  I think they should green-light a second series immediately and get on with it…lol. Enjoy!