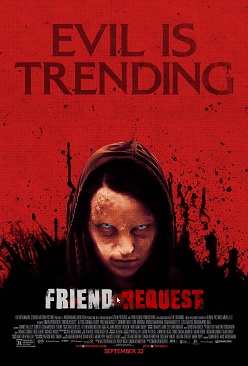 Laura (Alycia Debnam-Carey) is a very popular girl at college she has 800 friends on Facebook and she enjoys life with her friends and family.  However, one day, a girl named Marina (Liesl Ahlers) sends her a friend request on Facebook in hopes to becoming best friends.  Not knowing anything about Marina, Laura accepts the request and becomes friendly with her, but when Laura does not invite Marina to her Birthday dinner, Marina becomes upset when she sees pictures posted on Facebook and angrily confronts Laura in college, publicly the following day.  In the confrontation, Marina states she will seek revenge on Laura and when Laura unfriends Marina, Marina commits suicide via webcam video and sends it to her.  After that Laura finds herself being stalked and harassed by Marina's demonic spirit.

This film was interesting.  I enjoyed it although it was predictable.  There were a few jump scares involved and a few things that creeped me out a little, but nothing to really write home about.  The film was most likely made for the price of a boneless bargain bucket from KFC and is likely to make soo much more money back as these films do well in the cinema, but with that said, we will see what it does and if it becomes the new SAW series and spawns countless more other films.  Watch if it is your thing or want to know how not to treat others.