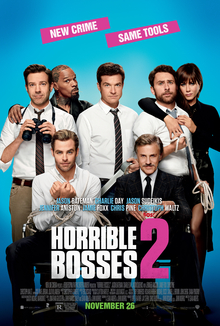 So I've committed a sin. Well sort of. I went to the cinema to watch this film recently and I hadn't seen the previous film. This is something I don't often do. I don't go into the cinema to watch sequels to a film I have not seen before, but on this one occasion, I made an exception.
I didn't know anything about the characters and the roles they may play or how their characters were in this film in comparison to the previous film, but I must say that this film was a good great watch.

Having worked previously for horrible bosses (Horrible Bosses), the 3 friends, Nick Hendricks (Jason Bateman), Kurt Buckman (Jason Sudeikis) and Dale Arbus (Charlie Day) decide to come together to own their own business and be their own boss. They think of their own product to sell but do not have the money to fund it. As they are looking for investors for their product, they approach Burt Hanson (Christoph Waltz) and his son Rex (Chris Pine) in which Burt makes a deal with them and they start hiring staff, manufacturing the product and are ready for distribution. However, at last minute, Burt backs out of the deal leaving them in debt. Feeling cheated, angry and wanting revenge, the bumbling trio devise a plan with the help of Dean 'MF' Jones (Jamie Foxx) to get the money so they can pay for their product and get out of debt.

Now, I hadn't seen the previous film so I had no idea what to expect and although I heard the first film was decent, I didn't know enough about the characters to understand them. With that said, you don't need to see the first film as this film is a stand alone film which does not need the prequel for you to understand why the 3 bumbling idiots are they way they are and to why they are such idiots. This is shown throughout the film as well as constantly reminded by a previous boss from the first film. I mean, I cannot stress enough how stupid these guys are. I wouldn't say that they are completely dumb. They aren't Harry and Lloyd, but damn, they are pretty stupid. But if anything, I see them as, one smart guy, one semi-smart guy and one non-smart guy and because they encourage each other on what are seen as good ideas at the time, and the fact that they are very close friends, their plans often fall apart, repeatedly.

All the actors play their parts well and the dialogue in this film is amazing. Very smart, witty and funny. I couldn't help but laugh at the antics and stupidity of this film and although, not the funniest film I found this year, 22 Jump Street has taken that crown for me, but this film was a very decent watch and if you enjoyed the first film, you will enjoy this one (I watched the first one before I wrote this review)