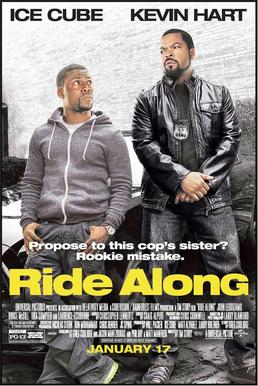 Ride Along is about a detective named James Payton (Ice Cube) who is on a undercover operation only to find that a lot of the crimes he has come across has been orchestrated by a man named Omar who no one has ever seen.  To make matters worse as James is chasing a ghost, James' sister is about to marry her boyfriend, Ben 'Blackhammer' Barber (Kevin Hart), a man he cannot stand and doesn't think he is worthy of her.  To add the salt into the wounds, Ben is a security guard trying to progress to becoming an officer, but James doesn't think that Ben is cut out as a man, a man for his sister or as a cop and schemes of a way to foil his plans, embaress him, so that his sister leaves him by showing him, what a cop's life is really like and take down Omar by taking him on a Ride Along.

This film is goofy, funny and basically exactly what you'd expect from a comedy.  A bit like watching a Will Farrell movie, you know what to expect.  With that said, the comedic beats land well and this film is generally funny and goofy, with witty dialogue and decent action.  Ice Cube playing the mean, angry big brother cop goes without saying and Kevin Hart playing, the funny guy, basically Kevin Hart gels well.

Nothing too spectacular in terms of directing, script, screenplay, acting, cinematography, but a nice little popcorn flick for you to hangout to with a couple of friends.  If anything, the computer game sequences are great.  Especially the game to real life adaption, when you see it, you will understand what i mean.

Have a watch, you might just chuckle, if not, laugh out loud!