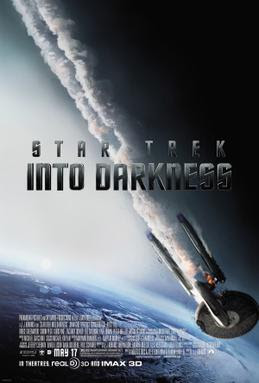 Just to give an idea of the film.

The film starts with Chris Hemsworth (Pre-Thor) as the first officer, George Kirk of the USS Kelvin, sustaining heavy attack by a Romulan ship in which commander Nero (Eric Bana) is searching for Spock and sends the USS Kelvin into oblivion just after George manages to rescue the crew by sending them to safety and his pregnant wife Winona who is about to give birth to James T. Kirk. Years later, reckless yet intelligent Kirk joins starfleet and meets up with emotionless Spock, has a bar punch up along the way, an allergic reaction, becomes a major pain in the ears for Spock who ejects him off the ship onto some 'any' planet and then manages to catch up with Nero by using the gas clouds of titan as a cloaking device eventually and...yeah, Kirk saves the day and everyone cheers. Needless to say, I found the film extremely sexy! There was just too much going on in the film.

This new film continues the adventures of Captain James T. Kirk (Chris Pine) and his adventures on the Starship Enterprise to boldly go where no man has gone before and the film starts with Captain Kirk and Dr. 'Bones' McCoy (Karl Urban) running for their lives as they try their hardest not to be killed by the primitive civilisation who dwell on the planet they are observing. After violating the Prime Directive in order to save Spock's (Zachary Quinto) life, Kirk is demoted by Admiral Pike (Bruce Greenwood) and has been reduced to first officer of his own ship.

After a meeting is held in regards to a former starfleet agent going "rogue", the meeting is attacked by said rogue agent in which Kirk and his crew are assigned by Admiral Alexander Marcus (Peter Weller) with the task of hunting rogue agent down. However, they find out that rogue agent, John Harrison (Benedict Cumberbatch) is currently hiding on the Klingon homeworld of Kronos in which no starfleet ship may go near without igniting a full scale war between the federation and the klingon empire.

As I'm not one to spoil movies for the viewers, I can only say that if you liked the first Star Trek 2009, you are going to absolutely love this one. The first film was just sexy. Considering how old school and futuristic the enterprise is, makes you appreciate what they were trying to do back in the 60's and to have the starship re-imagined from the outside in or inside out also makes you appreciate the future of things. Equipment, vehicles etc. Just everything was done in a old school way, like the TV series, but with modern imaginings of future concepts. This film continues this and basically improves on the first film in many ways other than character development. I found that the first film established the characters a bit more as this film didn't focus on much of the characters other than Kirk, Spock & Uhura. Even when Scotty got his screen time, meant that Sulu, Bones & Chekov didn't get as much time to shine. Not to say that it wasn't there, but not as much as the "main" characters.

Cumberbatch was awesome as the main antagonist and delivered a brilliant performance. Clearly stealing many of the scenes and just doing everything right! Peter Weller also did a great job and I can only say that his performance on top of Cumberbatch gave you the 'Bang for your Buck'.

But like I said before, if you liked the first one, I can not think of a reason as to why you wouldn't like this new one. The sound the starship makes going into warp is enough to send you into a frenzy. And without spoiling it, but the last few scenes involving Spock are absolutely priceless! Should J J Abrams do something similar for Star Wars, I'm sure he will capture the hearts of nerds everywhere!

Go watch if you like action, a touch of comedy and good over evil and sci-fi. If you don't like any of that, then your just boring, aren't you!