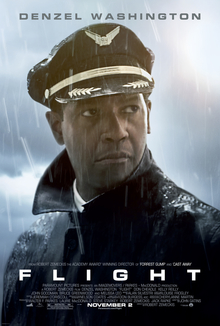 I almost cried. Like, very almost cried. I was slightly on the verge of crying watching this film and I'm not too proud to admit that. Damn, I'm a grown man and I have feelings too. I understand. I have empathy. And I've got to say, I left the cinema thinking, "That was a Brilliant Movie". Someone asked me if it was Denzel's best performance, hmmm...I don't know. But the story for me was great.

The film is about an Airline Captain named William "Whip" Whitaker (Denzel Washington) who on one day, flies a plane which eventually crashes and he gets knocked out from the impact. However, upon waking up from his state in a hospital, he is crowned a national hero as he was able to saves some lives. But as investigators look into the crash and who or what caused the catastrophe, they say that Whip was flying a plane under the influence of toxins in his blood stream in which they took samples when he was out cold and it also meant that he could spend a lot of years in prison for manslaughter.

Whip's old friend Charlie Anderson (Bruce Greenwood) who has been recently appointed to represent the airline pilots union comes to his aid and gets attoney Hugh Lang (Don Cheadle) to help Whip in any way possible, which includes escaping jail time and to get the NTSB off his back. As simple/difficult as this sounds, Whip has his own personal demons he needs to battle as well as trying to stay out of the media and public eye.

Like I said earlier, this is a very good film and I almost cried. I felt for the character Whip, not that I could relate, but the story was very compelling. I can't say I have experience or a lot of knowledge in the area, but the acting, the story, the direction, it was all just excellent to me. I've also said that it is hard not to like Denzil, especially when he does performances like this and from a director like Robert Zemeckis, I can only say this is a quality film. Go and watch the film. It is A LOT. I'm sure during the film, you will think about a Holiday...and then some.