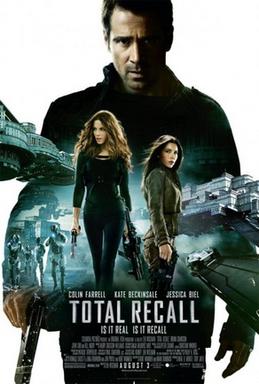 The classic of classic films. If you grew up in the 80's you will know 1 of many things and that is, the 80's was such an era where a lot happened. In my opinion, the best cartoons, the best toys and major films which birthed action hero's. Birthed stars who are seen as OLD now, but are big Legends in the game.
From Sylvester Stallone, to Bruce Willis to Arnold Scwarzenegger, back then, "acting" wasn't THAT necessary, but put a sword, gun or harpoon into someone's hand, give them a decent story-line, one liners, some cheese and have them save the girl in the end. Add some curse words, blood, spit, a round-house kick and huge explosions and THAT was your action film. Funny thing is, the formula just doesn't get old.

As for a remake of a classic film done non-other by, one-liner hero, Arnold Scwarzenegger, I was pretty dubious about how this remake would go down.

Now, Len Wisemen is somewhat my hero. His wife is Kate Beckinsale, who I think is very hot and he is the guy responsible for the Underworld Franchise (you know, werewolves against vampires and no lovey-dovey Twilight non-sense). So, as a director, I give him that credibility as I am a fan of his work, but this film ensured me that Len is a talented guy.

The story of Total Recall is based on a short story called "We Can Remember It for You Wholesale" written by Philip K. Dick and depending on the reader and the vision, the director may have different ideas as how they want the story to go. This is most definitely the case with this film, however, a lot of things stay the same as a lot of things have changed.

A factory worker named Douglas Quaid (Colin Farrell) goes to Rekall to have implanted artificial memories of being a undercover spy. However, on going to Rekall and to undertake the process, Bob McClane (John Cho) discovers that there are already memories of an undercover spy already implanted in Quaids head which now has a SWAT team after him to kill him. After escaping the SWAT team, Quaid then goes home only to have his own wife, Lori (Kate Beckinsale), trying to also kill him as he holds top secret information in which councellor Vilos Cohaagen requires. Quaid keeps running and bumps into Melina (Jessica Biel) who advises Quaid that he is not actually Quaid and he is an Undercover Agent named Carl Hauser who has vital information in his head and he must expose Cohaagen for what he really is.

First of all, they do not go to Mars. This is not a Spoiler as you can read this information anywhere. The big major difference between this film and the 1990 film starring Swarzenegger. Other than this and major special effects with the world, setting and car chases, the film generally plays out similar to the original. Everything is more or less the same and I got to say, this is a very decent film to watch. Yes, the characters are the same, but some characters are missing while this new film still pays homage to the original. Never really been a fan of Farrell, but he did well in this film and the cinematography will keep you entertained, especially Jessica.
Go see, especially if you are a fan of the original. However, I must point out that you will need to see this film with an open mind and remember, it's only a directors interpretation of a previously written short story.