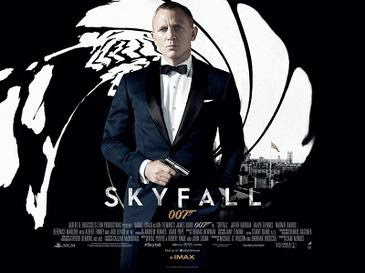 I was born in the very early 80's which means, there were Bond films a plenty. For me, Roger Moore was THAT guy. Swarve, cunning, thought on his feet. He did't mind a fisticuff and he had gadgets galore.  No utility belt, but he had a white under water Lotus. You cannot look me square in the eye and say you never wanted one. Two, that jaws guy.

So, this film is buzzing with the critics and people are saying it's perfect or near perfect. 5 Stars. 9 out of 10. All sorts. My verdict? Well, if you grew up on Bond like myself, then there is no reason NOT to like this film.
I'll explain.

The story is that there is a villain and there is a threat. Nothing new. Bond is on a mission and things get hairier and hairer by the second. When details of MI6 agents get placed on Youtube, Bond must find the culprit and stop them by any means necessary.
I won't go into it too much as this is such a good film, you need to go and just watch it. Moreover, this film IS James Bond, from start to finish and doesn't stray. The film starts with action and ends with action and the very last scene had me thinking...YEEESSSS!!!. The film pays soo much homage to the previous bond films, I wanted more and more. When you watch the film, you will pick it apart and love it. Unlike other Bonds, IMO, this film could not be any more British. And why not? It was such a lovely touch to encapsulate England the way it did and at the same time not over do it with patroism.
The villian was brilliant as well. He was very serious, a genius, cunning and you might even route for him. His mannerisms made the film comical as well as serious. The same way Bond is or how M and him are. And M, is a pitball. Hard nosed and will do whatever it takes with a great performance from all. Even Niomie Harris' character will get you feeling a lil warm inside. Very hot or maybe I found ber hot all by myself. Kind of reminds me of another flirty sexy lass from the previous Bonds. #EasterEgg
In closing, this is old school Bond. Back against the wall, doing whatever it takes to safeguard England from threats and like what I said about Roger Moore's, Bond, cunning, swarve and will give you a dose of everything which makes Bond, Bond. Even the nudey lady bits. But you couldn't expect anything less from Mr. Shaken not Stirred.

I suggest you go see it.