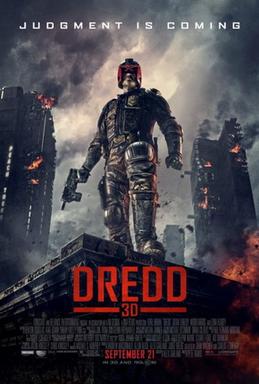 Do you remember that line? I'm sure it was in the trailer for the original Judge Dredd. Delivered by the blue or was it, grey!?! I think, grey-eyed Sylvester Stallone, way back when, in 1995 just before, well, you know, when things started going a bit bleak for the actor. I mean, Demolition Man was a great film and Cliffhanger also, but other than the Rambo's and Rocky's, what else was there?

I couldn't tell you how old I was when I watched the first Judge Dredd, but I remember watching it with my mum and thinking, this film is rubbish. At that time I thought, meh. I barely knew about the comic as I had read 1 or 2 but the film was very lackluster for me. How many years later, with what I believe to be not much hype around a brand new film based on the same character, which is not a sequel, but as a reboot for possibly a new franchise, (most likely, as they would like to do a Trilogy) one would wonder, is this reboot necessary or better yet, was it all worth it? Well, I'll put it simply. This Judge Dredd movie makes the previous Judge Dredd look like My Little Pony. I'll explain.

Dredd is set in a future where the earth has been destroyed and has become a irradiated waste land known as cursed earth. Population is high and on the east coast lies Mega-City One which inhabits 800 million residents and has a crime rate of 17,000 crimes a day. In way of law enforcement "Judges" police the city by being Judge, Jury & Executioner, on the spot. On a routine shift, Joseph Dredd (Karl Urban) is tasked with evaulating a rookie Judge, Cassandra Anderson (Olivia Thirlby) in becoming a Judge and investigate a 200-story slum tower block called "Peach Trees" where a ruthless drug lord Ma-Ma (Lena Headey) dwells who is responsible for the new drug sweeping the city called 'Slo-Mo', which slows the user's perception of time to 1% of normal time. Ma-Ma traps Judge Dredd and Anderson in the block and mark them for death in which both Judge Dredd and Anderson will need to now make a desperate attempt to bring Ma-Ma down and make it out alive.

Sounds like a horror story, right? Or better yet a computer game. It kinda reminds me of the Die Hard Triogy game which came out in 1996 where you had to work your way up the Nakatomi Plaza. I digress, but I'm sure you know what I mean. 200 levels until the end boss (drug kingpin) and 199 levels of enemies. Could you imagine how much sneaking around, bullets being fired, explosions, blood and gore there would be? Yes, this is THAT film. The 3D wasn't GREATLY in your face but it was decent enough and used effectively. I didn't get that funny feeling you (or just me) sometimes get between the eyes, but visually, I have no complaints. The cinematography is top-notch and even the slow-motion bit is used heavily, but not rinsed out to where you are bored of it. It's Stylish, it's bloody and it's also what Judge Dredd needed to be. The storyline is very linear and clear cut and the actors do a very good job. Karl Urban is a great actor and he seems to have nailed the Judge Dredd character as well as he nailed "Bones" from Star Trek. The posture, the mouth, the stubble, it's all there. If you like action, this film has your name all over it. And for me, what makes the film even more enjoyable is the simplicity of the storyline as well as the accuracy. You might not get that CLASSIC Sylverster Stallone 'I am the Law' line delivered the same way as he did, but then, didn't he take off his helmet!? And if you know Judge Dredd, Joseph never removes his helmet. Enjoy