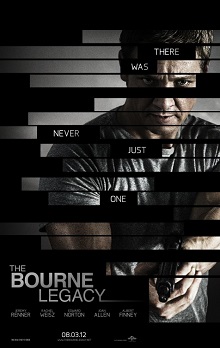 Jason Bourne is THAT GUY! You might be wondering, what type of guy is that. Well, if you have seen any of the other Bourne films, you'll understand. He is that guy who might miss every now and then when he's shooting, but always gets to his targets. He will find you. He will be in your home without you knowng unless you know how he operates. He is methodical and meticulous. Jason Bourne is an assassin with amnesia. The problem with Bourne was, he signed up for something and being the very first, there were some kinks which needed to be ironed out. With him having amnesia also meant that he was a confused soul who kept running to stay alive and kill whoever it is, with his set of skills, that got in his way from his goals. Like I said, Jason Bourne is THAT GUY!

Now, this NEW guy? He isn't exactly Jason Bourne at all. I'll explain the film.

The films starts with Aaron Cross going for what seems to be a leisurely swim as he is out in Alaska for a training assignment in which he must survive certain activities and traverse rugged terrain to arrive at a remote cabin. When the Blackbriar and Treadstone programs get publically exposed, they decided to shut down and kill all the agents that underwent the program. This means Aaron too. As Aaron takes genetically modified pills to enhance his abilities, not knowing exactly what is going on, Aaron realises that they plan to assinate him and embarks on a journey to seek Dr. Shearing to seek help, seek out the truth, stay alive and disappear.

If this film was exercuted better with a better storyline, then yes, this film would be equivilent to the films before, but as it isn't and the way it ends, you wouldn't want to see any more after this, unless the trailer promises something a bit more grittier and a it more story driven.