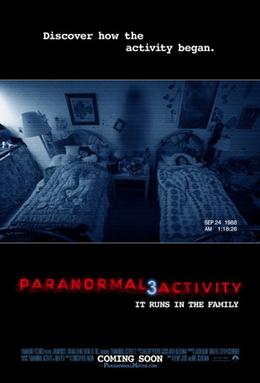 Would you believe, I'm back here again. We are back here again. This is the third strike and well, we know what we are watching and we still dare to watch it knowing full well that for some of us, this may not end well.

To give you a heads up, just in case you haven't seen ANY of these Paranormal Activity films, here is a quick run.

Paranomal Activity 1 (http://mrreno.blogspot.com/2009/12/film-recview-paranormal-activity.html), Man and his fiancée move into a house to later discover weird sounds and happenings. Man thinks it is cool, starts to antagonise what seems to be a spirit and then..everyone dies.

Paranormal Activity 2 (http://mrreno.blogspot.com/2010/11/film-review-paranormal-activity-2.html), Sister of PA1 lives with her partner and have just had a brand new baby boy. The sister pops over every now and then, but weird things are a-foot when things start moving by themselves and weird noises are heard. Sooner or later, by the time the family realises what's going on, the baby is being stalked by the spirit.

This time, this is a prequel as to why the first two films happened the way they did and I got to tell you, I don't think I found this one as funny as the second film. I was still at the edge of my seat and although you know what to expect from a found footage film of the same name and nature, if you have seen the both of them, this one DOES come across different. It's like they've upped the bar this time around.

But I can't spoil it for you as this film is a very good watch if you have watched the first two and all I can really say is, as a trilogy, this is a good film and worthy a watch for the story line, even separately. The only problem I have with this is the actual order you should watch them in. Maybe a Movie Marathon when you purchase them on DVD.