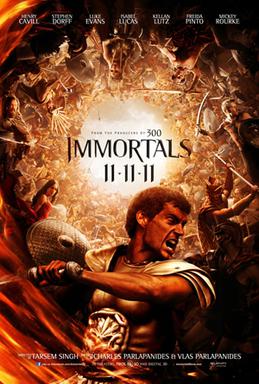 I saw the trailer to this film and though... "hmmmm". Then I saw another trailer and thought, "OH WOW! Yeah, I need to see this". And to be honest, I'm very glad I did. A lot of people were comparing this to 300 and I got to say, 300 is just an amazing film. The whole film, the way it was directed, acted out and the story. Yes, maybe a touch exaggerated or what-have-you, but you could not deny the fight scenes and the POSING throughout the whole film. Don't act like you never saw it. If I remember correctly, every man left the cinema 'War Crying'. And don't act like you never. Women did it too.

This film is of a different pace which runs somewhat similar to 300 but more to do with one man, Theseus (Henry Cavill) who was chosen by the gods, Zeus (Luke Evans - don't tell me he doesn't resemble Orlando Bloom) to lead an army against The Heraklion King of Crete, Hyperion (Mickey Rourke) who has declared war on Olympus after the Gods fail to answer his prayers to save his family from illness. Hyperion seeks the Epirus Bow, a powerful weapon created by the God of War Ares (Daniel Sharman) so that he can unleash the Titans from Mount Tartarus and destroy the gods and kidnaps a virgin oracle priestess called Phaedra (Freida Pinto) to help him. However, when Phaedra & Theseus escape captivity with a thief called Stavros (Stephen Dorff), Hyperion hunts them down only to be foiled by Poseidon (Kellan Lutz). For reasons I won't disclose as it will spoil the film, Theseus has is own motivation for what he needs to do and when he discovers the bow, things get out of hand as it falls into the wrong hands and Hyperion unleashes the titans. This is where The Gods Fight.

And fight they do. The scenes in this film are gripping and somewhat gory. There is a 'hammer scene' in which, no word of a fabrication, fib or lie, the whole cinema made a sound and squirmed as this scene was acted out. And the first fight with Theseus was just excellent in my eyes. He pulled out the spear not from where it entered. You'll understand when you see it. Then we have the GOD's intervening and the last fight, which was excellent. Even the prim and proper looking Athena (Isabel Lucas) aggled (hurt) a few titans well.

You like Greek mythology, 300 and musclar men and glorious fight scenes, then you will love this. Woman have been known to say, I'd watch it again...hmmmm, I wonder why? Something for everyone in this one.