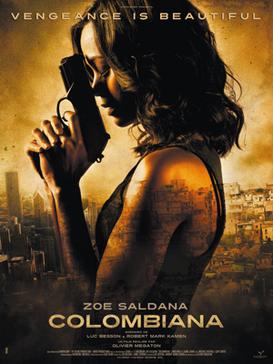 I'm going to try and do this review without being bias, as Zoe Saldana can't seem to do anything wrong, in my eyes anyway. She is up and coming and very very easy on the eye. As for her acting, I wouldn't say excellent in all honesty, I need to see more of her. I mean more from her. But all in all, she is very good and from starting her acting career in 2000 on screen, going from film to film such as 'Get Over It' with Sisqo, to 'Drumline' with Nick Cannon, then going onto working with Johnny Depp on 'Pirates of the Caribbean', 'The Terminal' with Tom Hanks and then starring as one of the lead stars in 'Avatar' along with Sam Worthington, you cannot say she isn't working Hard. And to now, in her OWN film where the central star is HER, you cannot say she hasn't done well for 11 years on screen.

This film is from the same person (Luc Besson) who did Taken with Liam Neeson and if you have seen that film and like it (some love it - me included) then this film does not disappoint. For me, it was like watching a Lara Craft (without the exploring - but two guns blazing) mixed with Commando, Taken and a'bad ass' with a gun or two. To put it into perspective, she wasn't f**king around. Don't get on the wrong side of her as she is a trained assassin and like the Tagline for the film, 'Vengeance is Beautiful'.

There is a little romance in the film which doesn't come across as forced. Well, a woman has her needs right? But without spoiling the film's plot as it's very straight forward and simple, she is avenging and it's more about vengeance than the little romance that was there. In addition, the first 15-30 mins will have you hooked. 1) The little girls acting and 2) The Catsuit. Yeah, men will enjoy. Women will enjoy. Men will enjoy more. Go watch it. If your an action type of person, this film had no dull moments from start to finish. Even the child actor was greatness personified. Very Good.