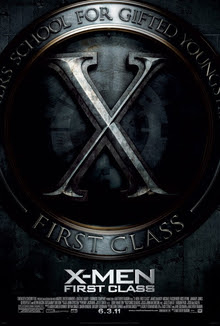 Does anyone know the story of the X-Men? Like, the REAL story? The originating story? And NO, NO and NO once again, I do NOT and repeat, DO NOT mean 2000's Film of the X-Men which somehow had Wolverine as a main character. I mean that garbage was watchable and at times, corny and yes, at the time it came out, 11 years ago, was actually 'the hotness', but now? And compared to First Class? Do me a favour, tell me that, THAT film is better than First Class and you can, DO ONE!!! I'm not saying that this film is excellent and such a masterful piece of work that the X-Men debut in 2000 doesn't come close at all, but...I'm going to be really honest...ummm, it actually doesn't. I'll explain.

Whether or not this film follows closely to the roots of the Real Story of the first ever X-Men is somewhat irrelevant. I watched the fabulous cartoon, back in the day. Die Hard fans will be fuming. Some will may even demand their money back. But then in saying that, they knew who the characters were before they went to see it so they could only just chill and except that the film was a brilliant watch from start to finish. Whether this is to do with a better director, better screen play or possibly 10 years of enhanced special effects, this film comes out on top out of ALL the X-Men movies. And along with my opinion, stands side by side Wolverine: Origins. No Matter how you feel about Wade Wilson.

Anyway. My knowledge of the first ever X-Men may not be the same as everyone else's, but I know that, Beast, Cyclops, Angel, Jean Grey & Iceman ARE the First class. So, what is this? Well to be fair, this film isn't really about the 'X-Men' you see on screen. I mean, really? Think about it. Yes it's called First Class but to call it 'Charles and Erik' is not a very good idea. So with that said, this film is about, Charles and Erik. Two friends who can't see eye to eye for their own 'political' or 'non-political' reasons.

The film starts off with small Erik Lensherr being separated from his parents at the Nazi German concentration camp and expressing his anguish and pain, Erik is seen bending metal with his mind by scientist Dr. Schmidt. Elsewhere Charles Xavier, a telepath, meets homeless Raven a shape-shifter and after being soo delighted he found someone like him, he invited her to stay with him and his family. Things really start getting heated when Dr. Schmidt does something soo unspeakable that leads to a crushed office room and two killed guards and then a very hell bent older Erik (Magneto)(Michael Fassbender) on a personal vendetta to track down and find Dr. Schmidt. At some point, he crosses paths with Charles and then after a struggle they eventually become friends while they both teach each other about their powers and the responsibilities as "evolved" humans.

Without going into too much detail because, it isn't really necessary, all you need to know is, the First Class kids get slapped up. They learn how to harness and use their powers to their advantage. Magneto becomes the "bad Guy" he is known to be in the Marvel Universe.

You need to watch this if you are or aren't a X-Men fan.