(film review) - The Next Three Days 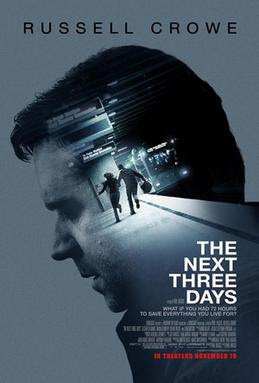 Russell Crowe is moody. I've only seen him in moody films. His characters just seem to be moody. He is an very good actor, but just moody. I guess, I have to see him in more iconic films that stand out more other than Robin Hood and Gladiator. Not that Robin hood even stands out, but his characters are easily forgettable. 'American Gangster' was a great film, but you only really remember Denzel in it. Even 'Body of Lies', but then, DiCaprio's in that. I haven't seen much Crowe films to be perfectly honest and I know your thinking, what about 'A Beautiful Mind?'. I don't know. Unless it's just solely him, a little bit like this film, his characters aren't that rememberable.

Anyway, this film and pardon me for saying this but I just need to, reminded me of that Gerard Butler film. You know which one. The one where he goes to prison and people seem to drop dead around him who were involved in the injustice of the case to do with his murdered wife. Law Abiding Citizen. Completely different film altogether, but there was something about it. Even down to the haircut, something reminded me of Gerard and that film, I digress.

Loving family man is at dinner and a argument ensues where the night is discussed in the morning but no one is really cut up about it. Sitting in the kitchen with his wife, Lara Brennan preparing things, John Brennan, a teacher, is content, making playful jokes to his son Luke and discussing the night before and the relationship with his father. This part of Crowe was strange to me...so unmoody.
The door bell rings out and as John open's the door, without using the peep-hole, the police come charging in, holding him back from trying to stop everything from happening and the police arrest and take away his wife for the murder of her boss.

This was within the first 10mins or so, so you know the film already has you gripped, right? Just like Law Abiding Citizen. Anyway, a few years go by and John visits his wife in prison with a slighty older Luke in which he doesn't acknowledge his mother at all. This, as well as the love for her is the factor that drives John to obsession and thoughts of breaking her out of jail. John talks with an 7 times prison escapee, Damon Pennington (Liam Neeson) after reading his book, who advises him on what to do, how to do it and what to look out for. After Damon takes all the cash in John wallet, John devises a grand plan to break his wife out of prison which involves set back after set back after set back and "youtube" clips. There are times in the film where you think, "damn, this guy just can't seem to catch a break". But he doesn't give up.
I've got to say that I was completely unsure about how it was going to end. Yes he breaks her out but does he get away with it? Do they both get shot down and leave the child without parents? Does the wife get away with the child and does he get shot in the process? The film could have gone in two ways. There is a part in the film where Lara, is wife says something and all I could think of was..."I can't be f**kin asked any more". The film would have ended there and then and that would have been hilarious.

The film strives through and although some things were unexplained or detailed, you couldn't help but think, "so, did she kill her boss or what?" and "Ohhh, that's why it's called 'The Next Three Days'" but at the same time, those "Three Days" for me merged into whatever it was that didn't really represent three days. Maybe a week or so, I don't know, maybe I missed something.

Enjoyable watch though. I can't see people being disappointed with this film much at all. The storyline could have been a bit better as the acting out-classed the stroyline somewhat. It was also great to see Lennie James, an english actor, up there. I didn't even realise it was him. Great acting indeed, just a bit of a semi-weak storyline where with a little bit more 'umff', would have been a great film.