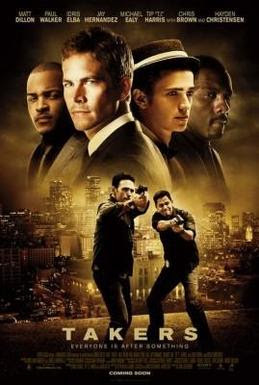 Sorry, but first things first. I like hayden Christensen as an actor. Maybe it's because I'm a Star Wars fan (not THAT much into it like going to conventions, just the story), but his acting in that was excellent. He wasn't seen as young Anakin in this film so I weren't expecting him to draw a Lightsabre or anything. If you seek my older reviews, I did one on Jumper and that was an watchable film that lacked storyline. With that said, it is kind of like this film. And his character kept wear this dodgy hat, ALL THE TIME!

Anyway, this film is about a bunch of, well.....Takers and if you didn't already guess, they TAKE things that don't belong to them. Now we aren't talking about Sweets, CD's, DVD's or Cassettes, we are talking CASH MONEY and a lot of it. In the Millions and Billions. They work as a unit. Smart, effective, quick, precise and they always leave NO evidence or paper-trail. In and Out!

In a heist a few years back, Gordon Cozier (Idris Elba) leads his crew which ends up with Ghost (T.I.) a former member going to jail for 5 years when things go wrong. After getting out early on good behaviour, coincidently the same day the crew do a major heist which leaves Jack Welles (Matt Dillon) and Eddie Hatcher (Jay Hernandez), investigating, Ghost pays John (Paul Walker) a visit, drinks scotch and talks about a new heist that he wants done in no more in what would seem like a few hours of his release. John says he will speak to the crew about it and let him know in the morning.
Being the persistant guy that he is, Ghost gate crashes a party and starts giving it the, 'I'm the man you need in your life' to his former girlfriend who is now with one of his crew members, Jake (Michael Ealy). Although he says that he harbours no ill feelings for the crew leaving him to get caught and him serving time and now Jake has his former girlfriend, there is nothing but tension in the air.
Ghost lays out his plans and as long as everything seems do-able, the team agree to do the heist make off with the money and give Ghost what he was owed from the heist that sent him to jail plus the accumulated interest. However, the heist goes very wrong and although they make off with the money, Jack spots Jesse (Chris Brown) in the subway which ends up being one of the best chase scenes I've ever seen on camera. They all meet up later on in a hotel after a "successful" heist but then someone has other plans.

The film was an enjoyable watch. If your a man looking for action, it has it. If your looking for a lovely female too, Lily (Zoe Saldana) is too hot. She didn't even do or say much in the film but she is sexy enough to just rock a frock and make you forgive the fact that her lines were short. Plus females (as i went with a female), all the men are hot, apparently and with a storyline that isn't too terrible, you won't complain watching this film.
The only bit you would complain about would be the scene that has Jesse and Jake in it. I can't think of a word to describe that scene that would be radio friendly.
The funniest bit had to be Ghost's commentary during the heist where he depicts everything what is happening through his headset to the rest of the crew. And like I said before, Jesse's chase scene had me on the edge of my seat. For Chris Brown's first film I've seen him in, he weren't a bad actor at all.

Watch this film, I'm sure you will enjoy as it has something for everyone. For me, it was Zoe Saldana.