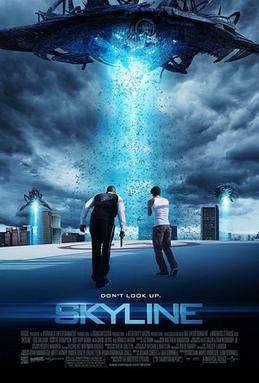 This could quite possibly be one of my shortest reviews ever. It's shit. The End. Only joking. Well on the fact that this is the end of the review anyway, but in regards to the film, hmmmm. The storyline seemed interesting. The special effects from a low budget film were standard and well, ummm....well, what you see in the trailer is more or less the film.
Imagine, Cloverfield. A film shot in 'Found Footage' style and because of the "EVENT" and what is going on, no one is none-the-wiser as to what is going on at all, so the film finishes and you leave the cinema thinking "WTF...what was all that about!?! What were their purpose? etc, etc" Well, we didn't need found footage for this film. Not to say that style was used, but I actually got NOTHING from the film to really detail and explain about it. It literally was like watching Cloverfield and thinking the same thing when it ended. But Cloverfiled IMO is 10 times much better.

I'll give you the plot if you haven't already read it somewhere.

Jarrod (Eric Balfour) and his girlfriend, Elaine (Scottie Thompson) fly to L.A to celebrate Terry's (Donald Faison) birthday. The morning after the party turns out to be more than just a hangover for one guy when blue sphere type lights come down from the skies striking different locations of the city and once he looks into it, he falls into a trance and gets abducted.
While all this is happening, Jarrod also succombs to the light but is torn away from it by Terry. Jarrod and friends then try to escape the building via means of a car that manages to get crushed by a huge alien foot and the driver doesn't get off lightly. After some running, more confrontation, more running, some brains and waiting, then it is day 2. Day 2 consists of more action and some U.S cavalry and a nuke. That all goes to shit and then the film does too, straight after, IMO it just coming FROM shit. Day 1 was boring for me.

There were some funny bits and that was about it. The story wasn't explained, the characters weren't in the film long enough for you to feel any kind of feelings towards them and it ends in such a way, it makes you question yourself. It's like, a good film with an interesting story which was poorly executed. Maybe things were edited out, maybe the Brothers Strause's have other ideas. I don't know. What I do know is...don't rush to see this, wait for DVD/Blu Ray or stream it. You ain't missing anything. Get ready for Battle: LA instead. Hopefully that will be much better.