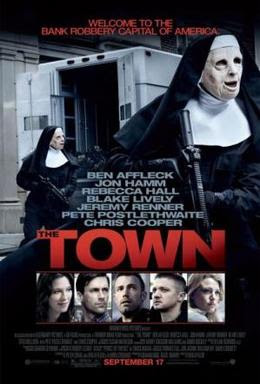 Nobody knows who Ben Affleck is other than the guy who married J-Lo aka Jennifer Lopez aka Jenny from the Block who was once with Puff Daddy, but whatever, who is he otherwise? Oh, the guy who starred in that dry Marvel film, Dare Devil? Hmmm...well, I wouldn't have gone out my way to see this film as it starred him and well, he ain't one of my best actors at all. Very far from that he ain't even on the list. If he was, well, he would be near the guy who plays Ben Mitchell on Eastenders.
Jokes and humour aside, whatever I thought of Mr. Affleck before this film, he has raised the bar. Still not a favourite actor but this film was a very good watch and with him in it AND his acting, well I have to recommend this sleeper of a film.

This film is about four lifelong friends who rob a bank and take Claire Keesey (Rebecca Hall) as a hostage. After the hostage is released and freed, James "Jem" Coughlin (Jeremy Renner) goes to follow her and possibly kill her, being the loose cannon he is. Doug MacRay (Ben Affleck) tells him 'No' and that he will instead, only to pretend that he is doing laundry, to then come to her comfort as she thinks about her hostage situation. They talk and meet a few times in which she says that she recognises one of the criminals by a tattoo. This turns out to be Jem. But keeping one step ahead of the law and from Claire, Dough, Jem, Albert "Gloansy" Magloan (Slaine), and Desmond "Dez" Elden (Owen Burke) enlist on another job for 'Fergie' Colm (Pete Postlethwaite), the man they work for so they he can leave town for good. The job goes a little wrong which leads to a car chase scene that has them trying to get away to only meet another police car at every other corner.

Narrowly escaping the law, Doug, now in a deeper relationship with Claire, visits his father in prison which leads to Doug finding out the truth about his mother. He tells his father that he is leaving Charlestown and also tells Jem who tells him that there is another job and he must do it since Jem has served time for him. Doug still says 'NO' and goes to Fergie to tell him in person that he isn't doing any more jobs. Fergie taunts Doug about the death of his mother and that he supplied his mother with drugs & threatens to kill his girlfriend, unless he does the job.

Doug excepts this job but tells him that it is his last. The plan is to enter the building as officers but leave as Ambulance assistants but Doug is set up and there is a huge shoot out in the end as SWAT has surrounded the entire building.

This was a fresh watch for me and was very entertaining. At some points, it was hilarious. A funny bit was where the gang got out their vehicle dressed up as nuns with guns and as they looked across the road, a police car was just there with the police man just looking over in shock eating a donut.

This is a creeper of a film and touches on love, trust, lies and deceit. Watch it, you will like it. Peek the Trailer: