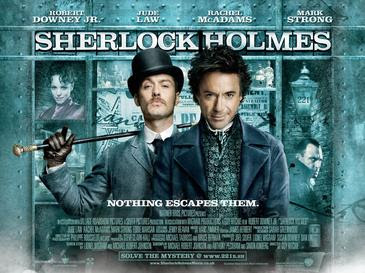 Robert Downey Jr. is on a role. After disappearing for a while as he has been in and out of trouble with the police and rehab for substance abuse issues, I do believe he is choosing good roles and he is on top form. If you haven't seen 'The Soloist', I suggest you go see it. But not only that film, he has been in 'The Incredible Hulk' and not only 'Iron Man 1' but the second instalment is out later on this year and the trailer looks excellent.

Sherlock Holmes, directed by Guy Ritchie is not your normal Sherlock Holmes. Guy Ritchie has injected his 'COOL' into this character. The same kind of COOL he injected in other films such as 'Lock, Stock & Two Smoking Barrels', 'Snatch' & 'RocknRolla'. This film has you look at Sherlock Holmes as a strangely random and unorthodox genius. To me, Sherlock Holmes came across as batty. Batty being a bit crazy. However, with his acute eye for detail and his intelligence, his batty behaviour can only be described as someone who is so intelligent, that they often think at a rapid speed that their behaviour seems a little crazy for the onlooker.

Sherlock Holmes(Robert Downey Jr.) and his partner, Dr. John Watson(Jude Law) race to stop a human sacrifice conducted by Lord Blackwood(Mark Strong). With reason's to believe that Lord Blackwood practices sorcery the police imprison him and before they hang him, Lord Blackwood tells Holmes that 3 more deaths will occur after his excution. Dr. Watson pronounces Lord Blackwood dead, but 3 days later, they find his coffin smashed open and the body of a red haired Midget inside instead of Blackwood. Sherlock Holmes along with Dr. Watson must now try and piece together all the bits and pieces surrounding a red haired midget, Lord Blackwood, his sorcery, holmes' ex-acquaintance, her employer and a plot that will change the world forever.

Sherlock Holmes in my eyes is a Deerstalker wearing, Pipe smoking detective with a partner who is a doctor, but in this version, he is a witty, intelligent and fast thinking detective with an acute eye for detail and nose for smells, who has a brotherly-love type of relationship with Dr. Watson who in his spare time does a spot of bare knuckled boxing. On the other hand Dr. Watson is also smart but comes across as a bit of a ruffian thug. I couldn't help thinking whilst watching the film that Dr. Watson, although he is a doctor, how comes he seems to enjoy fighting people? Throughout the film, it just seemed that Dr. Watson couldn't get enough of having a bit of a punch-up. You see in this film that, one cannot survive without the other.

How Guy Ritchie directs this film, you see the Guy Ritchie in it and if you do like Guy Ritchie films, you will definitely like this. It's Smart, Witty and funny. I do feel that it could have been a lot darker and sinister and possibly longer with a bit more action and twists, but what was seen was good and enjoyable. It even ended with the possibility of a sequel.

Go and see this film. In Cinema's NOW!
Trailer: