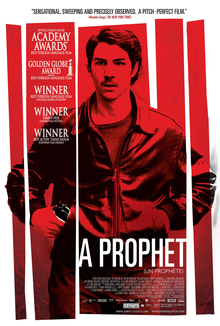 First and foremost, I can't stand subtitled films. It highly irritates me that I have to read whilst I watch what is going on. I also feel that if I take my eyes off the centre of the screen to read the writing at the bottom of the screen, something will past through the center of the screen or anywhere else on the screen but the bottom of it where the writing is and I'd miss it. The only saving grace in subtitled films and the English language is, when foreign people are talking, it sounds like 1000 words being said when all they are saying is, "Hello", so for a slow reader like me who is reluctant to read in case he misses something, finds gratification, somehow. Anyway, please industry, no more subtitled films....or get decent voice overs damnit!

Anyway, now that I got that off my chest, this film is French and is my first review on a non-english film. And dispite the subtitles, I did manage to follow this ever so long film. Yes, it is bluddy long. I wasn't prepared for it at all. Over 2hrs I spent reading subtitles.
Hmmm, this film is about a young man who is half Arab and also unable to read or write who is sentenced to 6 years in prison. Although he tries to stand up for himself, his first day is no walk in the park as he gets approached, beaten up and mugged for his footwear. In the beginning he struggles to cope with prison life until he is taken under the wing of a group of Corsicans with leader Cesar Luciani (Niels Arestrup) who "run" the prison how they see fit and swear to protect him throughout his time inside. Whilst inside Malik El Djebena(Tahar Rahim) learns how to work, learn different languages, learn how to read and write, toughen up and start to build his own network of alies under the quiet and earn is own respect.

Being a subtitled film, there wasn't a GREAT deal to read I guess, so i was able to catch everything that was said. This helped me keep up with the visuals which lasted over 2 hrs of watching time in which I'm sure they could have cut down. The storyline was a little slow and it was a little confusing to follow why some things were how they were. An example would be, the guy kills another guy in the film to stop him from being a witness of some sort in court, however, after he is dead, he is seen as a ghost(in normal human/solid form) in which the guy speaks to from time to time. I didn't get it, what was his purpose. Another thing I didn't get was the types of characters in the film and what seemed to be the politics in the film as well. Was it based on society in France and how some cultures are viewed or what? Another confusing element was the fact that, your watching this man sleeping, it looks like he's dreaming and fighting in his sleep and all of a sudden, Deers are running. The fact that we saw deer's in the following scene didn't really seem to hold any bearing to the first time we saw them. The fact that Malik El Djebena is called a prophet due to this, didn't give the name much grounds as he hadn't foreseen anything else in the film before or even after. Crazy and a little weird.

This film was only just enjoyable due to the fact that I can't stand subtitle films and there was a lot of action in it. The prison he was in was in such a state, it made me wonder if some prisons were actually like this. TV's in your cell, sex on call and getting beaten up or shanked or giving blowjobs for payment on the selling of drugs within the walls of the prison. And what made it worse, Djebena had day releases from prison and he was on a whole different adventure all in 12 hrs from his release time and his due back time. It was very entertaining to watch but just a little difficult to follow.
Out Soon!
Trailer: