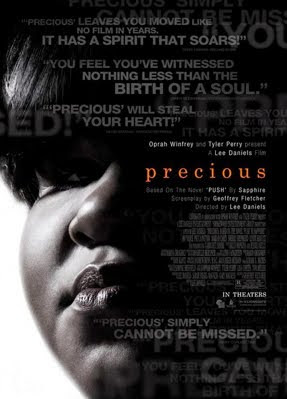 This film is based on a novel written by Sapphire, a American author and performance poet. It was originally called "Push" until Tyler Perry and Oprah Winfrey gave it some promotional assistance and released it through Lions Gate Entertainment and named it Precious.

Claireece Precious Jones (Gabourey Sidibe) is an 16 year old, born and raised in Harlem who not only is obese and illiterate, she also suffers from long term mental and physical abuse as well as sexual abuse from both her parents. She has already had a daughter named "Mongo" for short and on news of her second child on the way, her school suspend her to attend an alternative school in hopes to help change her life's direction. From this point, Precious tries to seek assistance and do better for herself with the help of her teacher (Paula Patton) until more family domestics lead to precious leaving home and being stuck in a halfway house until she gets back on her feet. The film shows us of Precious' daily struggles of being who she is and the traumatic experiences she has undergone through her life.

Without spoiling the film as it is a very good watch and maybe a little much for a Sunday morning (the day I saw it), the film didn't grab me as much as I thought it would. The trailer for the film was upsetting enough to watch and the film is equally the same, however, I did honestly think I'd leave the cinema with tears streaming down my face. I put that down to the fantasy land and narration precious gives throughout the entire film. As Precious is always in another world to help escape from a possible traumatic experience in the real world, it does make up and water down some of the scenes/film making them easier to view. I haven't read the novel myself but I have heard that the novel is very graphic and maybe this is the reason why some scenes were watered down to make for easy viewing. Hence the reason I didn't cry.

I can't say much about this film as I have already said enough and it is definitely a film to watch or read. It is sad, funny and I guess at the end, you may even smile, but the film on a whole is a film in which you may need to prepare yourself for before viewing. Some of the scenes that they do show are pretty graphic, but I do believe it could have been worse and more touching, like pulling on the heart strings and play on the audiences emotion levels.

If you can find this film out now anywhere....make sure you go and see it.
Trailer: