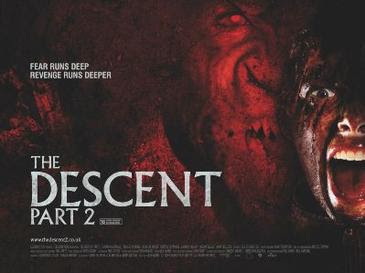 It has been a couple of years for us to remember the first film. You know, a bunch of females, a bunch of creatures, a lot of blood and gore and that's it. Well, The Decent Part 2 isn't any different than the first, but with the inclusion of a few men. I'll explain the first film for those who haven't seen it, very briefly.

Part 1
This film is about a woman, Sarah, who looses her young daughter and her husband in a car crash after white-water rafting. One year later, her mates decide to cheer her up and take her caving in a known cave, which promises to be great fun. Juno, Sarah's friend takes them to another cave instead, in hope of some much needed alone time to patch up their friendship. When all the women enter the cave, part of the cave collapses causing the girls to get lost and plunge further and deeper into the cave with no hope of another way out. After studying a cave painting, the girls try to find the other way out and end up fighting for survival when they bump into humanoid looking creatures, "crawlers" (As referred to in the credits) and get attack by them. Blood and gore galore. It's a test of trust, friendship and survival.
In the non-sequel version of the film (the one i saw originally), Sarah makes it out of the cave, runs to her car, only to start driving, then noticing a dead Juno with her face coved in blood sitting right next to her staring at her. As she screams, she snaps out of the dream only to see her daughter right in front of her with a birthday cake between them. As the screen pans out, we see that Sarah is hallucinating and she is actually still in the cave with the crawlers making their way closer towards her. Obviously, the other version has Sarah making it out which leads us onto part 2.

Part 2
Covered in OPB (Other People's Blood), Sarah is out the cave with no solid memory of where she is, what she is doing and what has happened. She is taken into hospital where the blood on her is discovered to be anything but her own. Curious, the Sheriff demands to know what is going on and forces Sarah back into the cave in which she crawled from to find her missing friends. She is assisted by the Sheriff, his deputy and 3 other specialists.
After meeting a man in the area who helps them to go down into the cave via another route using an old lift, the six venture looking for the missing girls where Sarah gets frightened after thinking she saw a crawler. Going further into the caves, the Sheriff sees a crawler and goes to shoot at it with his gun only causing the walls to come crashing down and separating everyone. At this point, Sarah escapes. While Sarah is off to save her own skin, she notices a crawler who has been alerted to Elen's presence. Sarah saves her and lets her know that they hunt via sound. while everyone get's picked off one by one and Sarah gets reunited with the Sheriff and an old friend, they all must strive to survive and make it out alive.

This film followed in the very same footsteps as the first one, so if you enjoyed the first, this one will also be enjoyable. I can't say it covers any new ground though. A bunch of people in a cave with things that can eat your face off, nothing more, nothing less. It's been tried. I guess, the only saving grace of the film is the twist at the end, the one in the middle and the fact that it's called 'The Descent part.2' as it is a continuation of the storyline rather than something completely new altogether. It's nothing like Alien or Aliens at all, just a continuation.

You won't like this film if your expecting something new, like untrodden ground and a complete different storyline. If you liked the first, then this will be watchable.

Go watch the film only if you liked the first one. Out in the Cinema NOW!!!
Trailer: